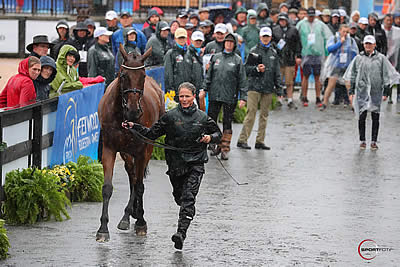 But Irish hearts were in their mouths as both Horseware Stellor Rebound, the mount of third-placed Sarah Ennis, and teammate Sam Watson’s ride were asked to represent. Ultimately both Irish horses and the rest of the 70 horses presented were deemed fit to compete in the final Jumping phase.

The tension was palpable among the fans, owners, media, and other riders when Ennis brought Horseware Stellor Rebound back for re-inspection. Following a long consultation, however, Anne-Mette Binder (DEN), Jane Hamlin (USA), and Andrew Bennie (NZL) nodded their assent and, accompanied by loud cheering, the Irish medal hope was declared good to go.

Irish nerves had already been tested in the non-stop rain when Sam Watson’s 14-year-old Horseware Ardagh Highlight was sent to the holding box. To the relief of Team Ireland, who currently sits in silver medal position, the bay was swiftly given the green light when re-presented.

Three other horses were sent to the holding box. Dutch horses Rumour Has It N.O.P. (Merel Blom) and team mate Jane Z (Renske Kroeze) along with Magnum’s Martini (Brazil’s Nilson Moreira Da Silva) were all passed on re-inspection.

New Zealand’s four athletes lit up the soggy afternoon parade by opting to ignore the pelting rain and wear their Sunday best. For Sir Mark Todd a suit and smart black shoes were the only option.

“Unfortunately, I didn’t pack any wellies. I thought it was going to be fine,” laughed the two-time WEG team champion.

Britain’s quartet has a two-fence advantage over the Irish in the team competition, who have no breathing space over the French, with the Japanese a further two fences adrift in fourth. But it’s much tighter at the top in the individual standings, with less than a fence covering the top seven horses.