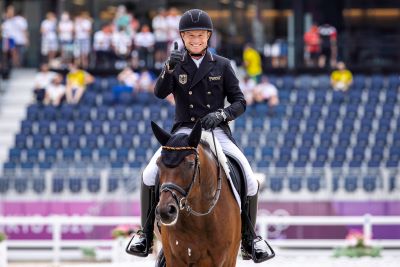 The leaderboard began to look a bit more familiar after the final session of Eventing dressage at the Tokyo 2020 Olympic Games in Baji Koen. Great Britain remains at the head of affairs, but it is now Team Germany that sits second ahead of New Zealand in third, while the host nation of Japan continues to shine in fourth place going into the cross-country phase.

An amazing score of 21.10 from defending double-champion, Michael Jung, lifted Germany from overnight fifth to just over two points behind the British leaders, whose position at the top of the leaderboard was bolstered by a solid test from Tom McEwen and Toledo de Kerser, who posted a mark of 28.90.

Jung was really pleased with his 13-year-old gelding Chipmunk. “We had a very good partnership; everything worked like I wished. Since the European Championships in 2019, I’ve had more time to train with him. We had a long winter to work more and have had many more competitions this year, so everything is going much better,” he said.

He may not have realised it, but he was being watched by IOC Member HSH Prince Albert II who paid a visit to the Equestrian Park to watch some Eventing Dressage, including the start of Jung’s Olympic title defence. After a traditional Japanese tea ceremony in the Olympic Family Lounge together with fellow IOC Member and FEI President Ingmar De Vos, the Prince was taken on a full tour of the venue, including a visit to the stables and the onsite veterinary clinic.

Meanwhile, world number two, Tim Price, was responsible for the dramatic improvement for Team New Zealand, who rose from sixth to third. His score of 25.60 with Vitali puts his side, which includes his wife Jonelle, on a tally of 86.40, exactly six penalty points behind Germany and just over eight points off pole position. “That’s good; that’s what we want!” Price said when he realised his result had made such a big difference. “We just want to be a solid team; we’re only a little nation with a few riders to choose from,” he pointed out.

Sweden dropped from overnight second to fifth, but Australia was another to rise meteorically thanks to a classic ride from the oldest competitor in Eventing at these Olympic Games. Andrew Hoy (62) and Vassily de Lassos posted 29.60, and all scores below 30 proved highly influential.

“I believe it is the maximum (score) we could have had from today. There were tiny little things that I can always improve. The joy I get from riding this horse is unbelievable, and I use one word to describe what I’m trying to achieve: harmony… when you see the great riders with harmony then it is poetry in motion!” Hoy said.

The Chinese team slipped from fourth to seventh, but pathfinder Alex Hua Tian is sitting in individual bronze spot with Don Geniro going into cross-country day. The 31-year-old made history when becoming the first Chinese athlete to compete in Olympic Eventing at the Beijing Games in 2008. And, based in Cheshire in England since 2013, he took individual silver at the Asian Games in Incheon (KOR) in 2014 before finishing eighth individually at the Rio 2016 Olympic Games.

He’ll be hoping to hang on to that bronze medal spot at the end of the cross-country contest. As the dressage phase came to an end, Great Britain’s Oliver Townend was in silver medal position behind Jung, who is chasing down his third consecutive individual gold.

But all the athletes are a little in awe of the cross-country challenge that course designer Derek di Grazia (USA) has set for them.

“The ground is fantastic and the fences are beautiful; like at every Olympic Games, the presentation you cannot question. It’s a proper challenge, and I don’t mean just with the height of the fences. The layout of the course, the flow – it’s going to be a challenge to get the time. But I’m sitting on one of the greatest cross-country horses in the world and we’ve got a wonderful relationship, and I believe it’s achievable but only time will tell!” said Andrew Hoy.

“It feels like a proper three-phase test to us this time. Mainly because of what Derek has done, it’s going to be a good competition for us all,” said Tim Price.

However, Germany’s Michael Jung is feeling super-confident, partly because his team has such a good draw. “We have a very good start position; our first rider is number 14, so before she (Julia Krajewski) goes some nice information will have come through which we can use. You need a lot of luck with the weather and other things you can’t control, but definitely it’s good if you start towards the end,” he pointed out.

As German anchorman, he has a great draw himself, going second-last in the field of 61.

There was one withdrawal from the second day of dressage – Katrin Khoddam-Hazrati from Austria.

Lara de Liedekerke-Meier from Belgium, who competed in the first day of Eventing dressage, has also withdrawn.

Tim Price NZL, talking about his horse Vitali: “He’s had to do everything right, and he’s 95% done that since last year when I first sat on him to now, otherwise I wouldn’t be here. I’m very confident in him but it’s a short time in terms of partnership, because that’s one of the key things on display at the Olympics is the partnership between horse and rider and how they can rely on each other. I’m very confident with him; he’s a very genuine guy and I feel very comfortable on him.”

Michael Jung GER, talking about his horse Chipmunk: “He’s a very powerful horse but very nice to ride cross-country; this helps a lot: you don’t need too much preparation before the fence. The time is very tough tomorrow, so you need good communication with your horse; in the end they have to listen and you need to be focused and to concentrate.”

Andrew Hoy AUS, talking about evolution of the sport of Eventing: “We are light years ahead of where we were when I started out. I rode my first championship in 1978 and it’s changed immensely, I believe for the good. In my lifetime I’ve looked at some of the changes and totally disagreed, but now I’m at the stage – if there’s a change I think about what I have to do to be there. It’s not about fighting change; it’s about working with change.”

Boyd Martin USA, talking about his test that didn’t go to plan: “Thomas (Tsetserleg TSF) has been so good in the dressage for years… some great moments and some disastrous. You come here hoping to give a personal best. Cross-country tomorrow is so difficult it’s so hard to get the time, but I think we (Team USA) are in with a chance if we can deliver three good rounds cross-country with three good seasoned horses that are older and experienced. We’ve nothing to lose by going out there and giving it a crack!”