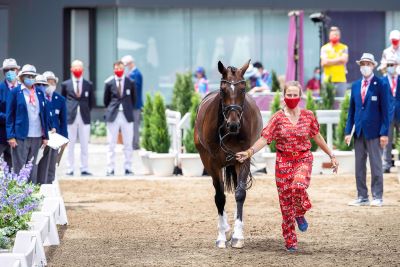 It’s the turn of the world’s best Eventing athletes to stand under the Tokyo 2020 Olympic Games spotlight over the next few days, as all but one of the horses presented at the horse inspection at Baji Koen Equestrian Park were confirmed for action by the Ground Jury.

The Polish reserve combination of Jan Kaminski and Jard have been called up because Pawel Spisak’s gelding, Banderas, did not get through. Meanwhile, Castle Larchfield Purdy, competed by Lauren Billys from Puerto Rico, was sent to the holding box but was subsequently declared fit to compete. Canada’s Jessica Phoenix did not present her gelding Pavarotti, so the number of starters in the opening Dressage phase has been reduced from 65 to 63.

First into the arena will be Thailand’s Arinadtha Chavatanont with Boleybawn Prince. The pair was on the bronze medal winning team at the Asian Games in Jakarta, Indonesia in 2018. It’s a history-making moment because both Thailand and China are fielding an Olympic Eventing team for the very first time.

Also making his mark, and elegantly turned out, is the first-ever Eventing athlete to represent Hong Kong, Thomas Heffernan Ho, who will partner the stallion Tayberry.

There will be two sessions of Dressage Friday and another on Saturday morning before the horses are transported for a sleepover at Sea Forest in Tokyo Bay, where the Cross-Country phase will take place early on Sunday morning. They return to Baji Koen that afternoon and on Monday the final Jumping phase will decide the team and individual medals.

A brand new Olympic Dressage test, taking just under four minutes to complete, will be performed for the very first time, and second to go will be world number one Oliver Townend with Ballaghmor Class. The British rider will be aiming to put as much pressure as possible on reigning individual double-champion Michael Jung from Germany, who will be second-last to go on Saturday morning with Chipmunk. France will be defending the team title.

There’s a 40-year gap between the oldest athlete in the field, 62-year-old Andrew Hoy from Australia, and the youngest, 22-year-old Lea Siegl from Austria. Every one of them will be hoping to hog the Olympic limelight, and you can keep up with all the results live at this link here.