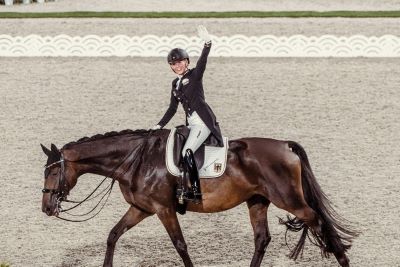 Just a few short weeks since they claimed all gold at the Tokyo 2020 Olympic Games, Team Germany will line out at next week’s FEI Dressage European Championships 2021 on home ground in Hagen where they look set to claim their 25th team title.

There may have been brief lapses in their domination of the European team gold medal leaderboard – the Dutch coming out on top in 2007, 2009, and again in 2015, and Great Britain victorious in 2011 – but in the 58-year-history of this event that takes place every two years, the German record is phenomenal.

They posted their 24th team victory in Rotterdam (NED) two years ago where longtime legend Isabell Werth brought her personal European medal collection to a staggering 24 when adding both the individual Grand Prix Special and Freestyle titles riding Bella Rose. In the Special it was a German one-two when Dorothee Schneider (Showtime) lined up in second, and they were completely dominant in the Freestyle when Schneider and Jessica von Bredow-Werndl (TSF Dalera BB) took silver and bronze.

At the 2021 edition, Werth is joined by the same two compatriots, although von Bredow-Werndl is the only one who will ride the same horse – the fabulous Dalera with which she won triple-gold in Tokyo. This pair is now the dominant force in the sport and the ones everyone else have to beat.

Werth will partner Weihegold, the 16-year-old mare with which she won Olympic team gold in Rio de Janeiro (BRA) in 2016 and triple-gold at the FEI European Championships in 2017, while Schneider will compete Faustus 94, the 13-year-old gelding with which she has been posting some big results this summer.

Rounding up the formidable German side will be Helen Langehanenberg, who rode on the winning European team in Gothenburg (SWE) in 2017 and who was individual silver medallist in Rotterdam in 2011 and Herning (DEN) in 2013 partnering Damon Hill. In Hagen she will ride Annabelle, the 13-year-old mare with which she won the Grand Prix Special at the CDI3* in Aarhus, Denmark last October and who finished fourth behind team-mates Schneider (Showtime), von Bredow-Werndl (TSF Dalera BB), and Werth (Bella Rose) at CDI4* Kronberg (GER) in June.

A total of 72 athletes from 23 countries will contest the medals this time around. And of the 15 participating teams, the biggest challenge to the defending champions look set to be the British who clinched Olympic team bronze.

They are fielding their full Olympic side and, in the four-horse format, their Olympic reserve partnership of Gareth Hughes and Sintano von hof Olympia will get to perform this time around.

Charlotte Dujardin’s 10-year-old Gio set hearts fluttering in Tokyo, with the emergence of another dream partnership to follow in the footsteps of the great Valegro always a possibility. Carl Hester’s En Vogue and Charlotte Fry’s Everdale will complete their line-up and, fresh and rested after their trip Japan, the British horses will be on familiar territory in Hagen having competed there before.

Cathrin Dufour and Bohemian headline the Danish foursome while Beatriz Ferrer-Salat and Elegance will lead the Spanish team when the action gets underway with the first group of riders in the Grand Prix on Tuesday, 7 September. The Team medals will be decided when the Grand Prix concludes on Wednesday and the Grand Prix Special will take place on Thursday followed by the Freestyle on Saturday 11 September.

The FEI Dressage U25 European Championships will also take place at Hagen during the week, coming to a close on Sunday 12 September.