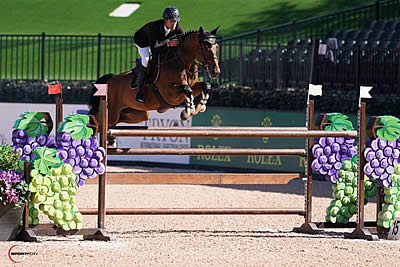 Amidst 42 entries and 21 jump-off competitors, Garza anticipated a smaller jump-off from his course walk, but was pleased with his results and Victor Finn DH Z’s efforts. “I think there’s just a good field here and that happens. With so many in the jump-off we had to really go for it this time and fortunately my horse was supernatural today – I really have to give it to him,” Garza emphasized. “In the jump-off there were just a lot of twists and turns. There was a very forward eight to a double that my horse was able to do well and helped me out there. He was just really good today.”

Garza revealed his strategy in such a large jump-off was to go as fast as he could and try to ride mistake-free. He stated, “We have Saturday coming up, but then again, this is a huge money class and you never know, you might have a pole down later. We really tried to win this class and get today over with before concentrating on Saturday, so hopefully we can pull something out Saturday.

“I’ve had this horse since he was seven, but he was off and on with an injury for about a year and just came back into competition about two months ago, so I’m really happy with how he’s come back. He feels great, he feels strong, and he’s an exceptional horse – a superstar, I have to say,” Garza remarked.

Garza is now gearing up to compete in the $384,000 Rolex Grand Prix CSI 5*, in which he achieved second place honors in 2017, and commented, “I’ll just try to put him [Victer Finn DH Z) back in the box, so to speak, and he’ll be okay. He’s one of those horses that likes his job and that makes our job a lot easier.”