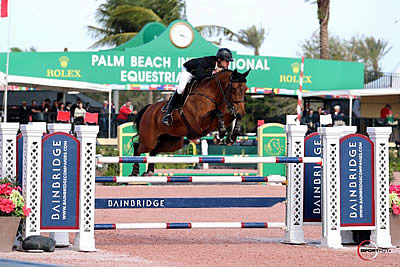 Wellington, FL – January 26, 2018 – The third week of the 2018 Winter Equestrian Festival (WEF) continued Friday with the $35,000 Bainbridge FEI 1.45m Classic as the main feature in the International Arena. Eugenio Garza (MEX) and his mount of six years, Bariano, captured the win in the FEI ranking class.

The $35,000 Bainbridge FEI 1.45m Classic had 61 entries competing over a speed course designed by Peter Grant of Canada. Eighteen of those were clear, and the fastest in the class was Garza with Bariano, a 17-year-old BWP gelding by Jetset-D x Skippy owned by El Milagro, with a time of 63.57 seconds.

Tina Allen, of New Canaan, CT, continued her winning streak from week one of the Winter Equestrian Festival into week three with an impressive championship win aboard her mount, French Kiss, a 14-year-old Oldenburg gelding, in the Triple Crown Blankets Adult Amateur Hunter Middle Sec. A. The pair dominated the division with three blue ribbons and a second over fences, with a third-place finish in the under saddle.