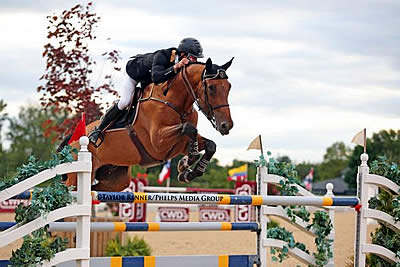 Lexington, Ky. – May 14, 2016 – The Kentucky Spring Horse Show concluded on Saturday with the day’s highlight event: the $130,000 Hollow Creek Farm Grand Prix CSI3*. Eugenio Garza (MEX) and Bariano bested a field of 41 competitors to claim the top prize with a blazing jump-off round in 39.160 seconds.

“I’ve had [Bariano] for almost four years,” said Garza. “He’s been my horse for everything. He’s taken me from Children’s Jumpers to the grand prix, so I owe him pretty much everything. He feels better than ever. He really gave it his all tonight and I couldn’t be more proud of him.”

Nine horse and rider combinations were able to master the Bernardo Costa Cabral opening course, moving into a jump-off that six would go on to produce double-clear efforts from.

“The course was really nice, [Bernado] did an extremely good job,” said Garza. “It was definitely a challenge – something to think about while going around the course, but it was not crazy. I think it was overall a really nice track. His tracks have been amazing all week and I think it was perfect for tonight.”

Aaron Vale (USA) and Quidam’s Good Luck, owned by Troy Gaus, were hoping to claim their second consecutive Hollow Creek Farm Grand Prix after winning the event in 2015. They were the early clear pathfinders in the first round and set the pace for the jump-off as the first to take on the shortened track in a speedy 39.920 seconds.

“[Bernardo] does a great job every time,” said Vale. “He gives a tight time allowed, but gives you different ways to get it. You can leave some strides out; you can make a short turn to the left or a short turn to the right. You kind of ride your horse and figure out a way to make the time allowed. Tight times allowed with these big fields are popular these days, but he does it fairly. If your horse has a weakness or a strength you can kind of pick and choose and still make the time.

“Quidam’s Good Luck wins a lot all year long, but he especially goes well in this ring,” continued Vale. “He won both FEI grand prix last spring, and he’s won some other grand prix here as well. This horse just loves this ring. He goes super here. Kentucky is a great place; it’s one of the premier facilities in the country, if not the premier facility.”

Shane Sweetnam (IRL) and Chaqui Z, owned by Spy Coast Farm, entered the Rolex Stadium one round later and attempted to catch Vale’s time, but felt short by one second in 40.540 seconds. The pair would go on to take third place honors.

It was looking like Vale would take the title once again until Garza, who placed second behind Vale last year, and the 15-year-old Belgium Warmblood gelding, owned by El Milagro, returned to the ring to challenge Vale’s time as seventh in the jump-off order-of-go.

The two horse and rider combinations battled it out for the second year in a row, but this year it was Garza who was able push ahead Vale’s time by 8/10th’s of a second to take the lead in the victory gallop.

“Leading off the jump-off, you never want to go first, but better to go first in the jump-off than not at all,” laughed Vale. “I was quite fast to the fourth jump. I did check up a little to the combination and again to the last, and that was the difference. If I could have found one of those strides to leave out I don’t think Eugenio would have got me.”

“I saw Aaron go first – and you know Aaron, he’s very fast – and I honestly didn’t think anyone could catch him, including me,” admitted Garza. “My trainer, Eddie Macken, just told me to feel how it goes, and just give it my all and that’s what we did. Bariano just helped me out and was amazing and everything just came up really nice in the jump-off. I think I was able to gain a little bit more time to the last one. I took one stride less than Aaron, but it was really close and I don’t think I could asked anything more from Bariano.”

“Kentucky always treats us well,” said Garza. “I love it here. It’s an amazing facility, the footing is perfect, the organization is amazing – we just love it here. Fortunately, we’ve been doing well and it’s just an amazing show to come to. It’s really relaxed and it’s great for the horses. The weather has been great all weekend and the horses love it here.

“A big thank you to all of my team,” continued Garza. “They have been amazing and I’m just so happy to have such a great team behind me.”

The Kentucky Spring Horse Show will come to an end on Sunday with the $25,000 Under 25 Grand Prix and the $50,000 Commonwealth Grand Prix, which will count toward valuable points earned in the Rolex/USEF Show Jumping Ranking List.

It was all about the stallions on a cold and blustery day Saturday at the Kentucky Spring Horse Show in the Stonelea Ring. Championships in the Amateur-Owner 18-35 and Amateur-Owner 36 and Over Hunter divisions both went to stallions. In the younger division, Stephanie Danhakl took home the top prize on her 7-year-old Hanoverian stallion First Light. The reserve championship went to Alliy Moyer and Carlson. In the older division that followed, Becky Gochman won the championship aboard the 14-year-old Warmblood stallion Empire with the reserve going to John Ingram and Airport 48.

First Light was back in the tricolors today having won the Regular Conformation Hunter championship on day two with trainer Scott Stewart.

“First Light is definitely my greenest horse,” Danhakl explained. “He’s only 7 years old this year and he’s a stallion, so he’s a little bit trickier for me. I feel like I started to get the hang of him this year. He’s a little different ride than what I’m used to. He really requires you to direct him and be very accurate in your turns and balanced. He keeps me on my toes.”

The drastic change in the weather was certainly a factor for riders on Saturday.

“When I got on him today he was very fresh because of all the wind,” Danhakl said. “He was still a little fresh in the ring, but he gives you such a great feeling and is very well mannered. He whinnied a few times going around, but I’m sort of used to that so he really was great.”

“It was a very brisk day in Lexington, Kentucky, so I had a little bit of a different horse in Empire today,” Gochman said. “He was feeling a little frisky. Yesterday we really clicked. I feel like he’s in a really great frame of mind and he’s just such a special horse.”

Another generation of winning hunters may be on the way for Gochman as well.

“We’re excited because we recently purchased his son Evermore,” Gochman explained. “We hope he can take after his dad in his ways too.”

Danhakl and Gochman were both full of praise for the Kentucky Spring Horse Show and the city of Lexington.

“It’s a great tradition for us to come here,” Gochman said. “It breaks up the ride back home for the horses and it gives us a chance to compete somewhere where the fences are really put together in a lovely manner.”

Gochman was also enthusiastic about all that Lexington has to offer.

“We have always enjoyed the town of Lexington,” Gochman continued. “The whole Gochman family can’t get enough of it. We really enjoy the restaurants and the horse themed artwork throughout the town. It always holds a special place in our hearts so we are always excited to come back to Kentucky.”

Danhakl was also appreciative of the environment at the Kentucky Spring Horse Show.

“It’s such a beautiful place,” said Danhakl. “I love all of the greenery, the grass, the rolling hills and the trees everywhere. I like to be able to escape the heat at this time of year in Florida. All of the horses just left and came straight here so they’ve had a nice time getting to enjoy the cooler weather.”