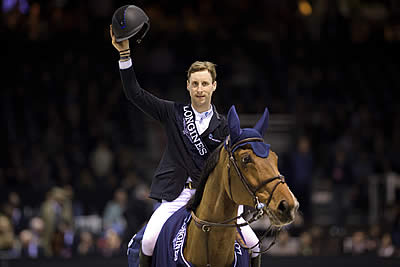 A brilliant performance from his horse called Espoir secured a place at the Longines FEI World Cup™ Jumping 2018 Final for Belgium’s Pieter Devos (31) at the second-last leg of the Western European League in Bordeaux (FRA). Setting a sizzling standard at the halfway-stage of the 10-horse jump-off against the clock, the pair couldn’t be caught despite the best efforts of three-time champion Marcus Ehning (43) from Germany who had to settle for runner-up spot and Spain’s Manuel Fernandez Saro (43) who lined up in third.

With 29 points already to his credit, Devos knew he had it all to do. Something in the region of 40 points is required to confirm that ticket to the finale in the French capital city next April and time is running out. But it wasn’t just the win and those 20 extra valuable points that pleased him most; it was the two spectacular rounds produced by his 14-year-old gelding, whose name in English translates to “hope”, that really lifted his spirits.

“I came here in the hope of qualifying; this was one of the last chances and even though I had a good indoor season I needed those extra points. Of course, the win is great and I’m excited to go to the Final; it will be my first and I’m really looking forward to the experience. But to be honest the very best thing is the feeling Espoir gave me today. He had a break and did his first World Cup in Leipzig when we had one down, and tonight he felt like he is right back in great shape and that makes me very, very happy!” — Pieter Devos BEL

Switzerland’s Paul Estermann and Lord Pepsi were first to go clear over Italian course designer Uliano Vezzani’s jump-off track, but Saro and Cannavaro set a new target when clearing the line in 38.40 seconds. Sixth to go, Devos always looked like he meant business, galloping into the ring and setting off with fierce determination.

“Before I went in I thought I’d be happy to finish in the top five, but in the end I took a risk between the first two fences and that went well, so of course then I got more ambitious and I just wanted to win! The crowd was great; they were shouting at me all the way to the last so I took the risk there as well!” — Pieter Devos BEL

His time of 36.53 seconds was always going to be difficult to beat, and although Ehning, second-last into the arena, looked set to put up a big challenge with Cornado NRW they broke the beam in 38.09 seconds for second place.

Ehning has now moved up to third place on the Western European League table which continues to be dominated by Frenchman Kevin Staut, while Sweden’s Henrik von Eckermann lies second and Devos makes a meteoric rise to seventh position. The top 18 qualify for the Final and the pressure will be at boiling point when the last qualifier gets underway in Gothenburg (SWE) in three weeks’ time.