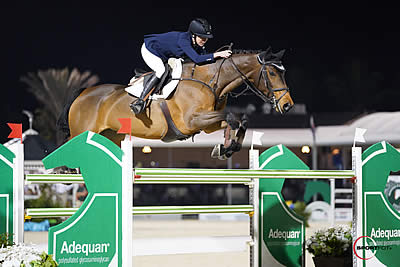 Wellington, FL – January 25, 2020 – Erin Davis-Heineking (USA) is making the most of her two-week visit to the 2020 Winter Equestrian Festival (WEF) with a win in the $137,000 Adequan® Grand Prix CSI3* during “Saturday Night Lights” of week three at the Palm Beach International Equestrian Center in Wellington, FL on Saturday, January 25.

Davis-Heineking rode Leonie to thrill Saturday night’s crowd by leading the grand prix from start to finish after posting the first clear round over Kelvin Bywater’s (GBR) opening track. She again returned first over the short course and set the pace fault free in a quick 45.51 seconds. At the conclusion of a six-horse jump-off, Davis-Heineking still stood atop the podium, barely inching out Ireland’s Shane Sweetnam and Karlin van’t Vennehof. They were just fractions off the win in 45.67 seconds.

“I was a little bit in disbelief that I had left a couple of jumps up out there,” said Davis-Heineking of her jump-off ride. “It didn’t quite go as I planned; I had an idea in my mind of the numbers that I wanted to do, and then right before I went in, my trainer/husband [Christian Heineking] basically said to leave one out from all of those. So, I took a shot at the last line and tried to do the six. I chipped in a seven, and she left it up. I was really proud of her.”

Saturday morning in the E. R. Mische Grand Hunter Ring began with Gabrielle Sokolow and Kindred earning champion in the Large Junior Hunter 15 and Under division. Sokolow and Kindred won the under saddle and received an additional first and second place ribbon to claim the championship title.

Kindred is a new ride for Sokolow, who has had the horse for less than a week. Sokolow went to Ocala last week to try the horse as a prospect for the junior hunter division. It was clear that the pair was right for each other when they won all three classes and were champion in their first show together earlier this season. “We instantly knew that it was the right match!” commented Sokolow.

The eight-year-old gelding was then brought to Wellington, where he showed earlier in the week with Kate Conover. Sokolow, of Westlake Village, CA, then took over the ride on Kindred again and the pair was able to continue their winning streak. “He has such a great personality and the way he goes around the ring is just so pretty,” said Sokolow of her new mount.