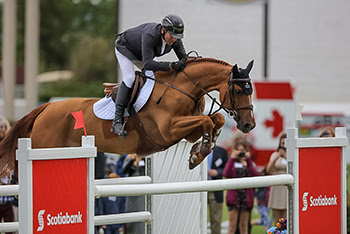 Calgary, Alberta – Canada’s Eric Lamaze scored back-to-back victories at the CSI5* Spruce Meadows ‘Continental’ tournament on June 15 and 16.  Hot off his win in Friday night’s $131,600 Scotiabank Cup, Lamaze returned to the Meadows on the Green arena on Saturday to claim victory in the $70,200 Canadian Utilities Cup.

On Friday night, Lamaze qualified both Chacco Kid, a 12-year-old Oldenburg gelding (Chacco Blue x Come On) owned by the Chacco Kid Group, and his 2016 Rio Olympic bronze medal partner, Fine Lady 5, for the jump-off, joining six other horse-rider combinations.  Once Chacco Kid posted a time of 37.13 seconds over the course designed by Brazil’s Guilherme Jorge to move into the lead by over two seconds, Lamaze elected to withdraw Fine Lady 5 in the hopes his leading time would stand up for the win.  Stand up it did, with Lamaze and Chacco Kid claiming the Scotiabank Cup over 19-year-old American Lucy Deslauriers who stopped the timers in 39.16 seconds riding Hester.

“Most grand prix events don’t even offer $100,000 in prize money so when you’re going for $131,000 on a Friday night, you are jumping for real money,” said Lamaze.  “It was an incredible class.  The track that Guilherme set was built for speed.  If you wanted to win, you had to be committed.

“After the jump-off round I had with Chacco, I didn’t think I could possibly go any faster with Fine Lady!” said Lamaze of his decision to withdraw Fine Lady 5, automatically placing the pair eighth.

The leading all-time money winner at Spruce Meadows, Lamaze increased his lead even further on Saturday by winning the Canadian Utilities Cup.  A total of 12 riders jumped clear in the first round to advance to the tie-breaker including Lamaze aboard a new mount, Saura de Fondcombe, owned by Katharina Peter.  As the tenth rider to return for the jump-off, Lamaze was chasing a time of 36.07 set by Daniel Coyle of Ireland riding Quintin.  Despite the new partnership, Lamaze guided the 12-year-old selle francais mare (Balou du Rouet x Paladin des Ifs) home in a time 35.38 seconds to claim his second victory in as many days at the iconic Canadian show jumping venue.

“Last night, the jump-off was insane!  Today was a little more subdued,” laughed Lamaze, 50, who also finished runner-up in Thursday night’s $40,000 1.50m Husky Energy Classic with Saura de Fondcombe.  “It was a solid 1.50m course with 12 clear, and I had a good position going towards the end.  She is a very careful, genuine mare.  She’s had a lot of experience at this level and you can take a lot of risk.  She’s a really good horse.

“As I always say, if you win a class at Spruce Meadows, you can win anywhere in the world,” said Lamaze.  “Horses learn a lot and riders learn a lot by competing here.  It’s real sport.  If you want to participate in any major championships, you have to prove you can survive Spruce Meadows!”

Following the Spruce Meadows Summer Series, concluding on July 8, Lamaze will return to his home base in Brussels, Belgium.  From there, he will compete at the CSI5* Global Champions Tour in Chantilly, France, from July 12 to 15 followed by CHIO Aachen, Germany, from July 17 to 22.