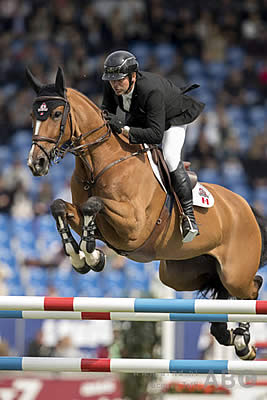 On the eve of the 2016 Rio Olympic Games, the 2008 Olympic Champion has regained his place in the top ten with a total of 2,449 points.  Having started the year in 39th position, Lamaze has steadily climbed up the world rankings following consistent performances across the globe.  Germany’s Christian Ahlmann has moved into the top position with 3,204 points to push last month’s number one, Simon Delestre of France, into second with 3,140 points.  Penelope Leprevost of France is number three, as well as being the top-ranked female rider in the world, with 2,909 points.

Lamaze’s return to the top ten after a four-year hiatus comes following a rebuilding period.  Formerly the number one ranked rider in the world, Lamaze has concentrated on rebuilding his string of competition horses following the sudden death of his great stallion, Hickstead, in November of 2011.  With the support of Andy and Carlene Ziegler of Artisan Farms, Lamaze has developed several young mounts into top international contenders.

In July, Lamaze scored a total of four victories in CSI5* competition, winning twice at the Spruce Meadows ‘North American’ tournament in Calgary, AB, and twice at the prestigious showgrounds of Aachen, Germany.  Three of the four victories came aboard Fine Lady 5, Lamaze’s mount for the Rio Olympics.

“Winning the two classes in Aachen was a big deal, as was having scores of clear and four with Chacco Kid in the Nations’ Cup,” said Lamaze, 48.  “Every one of my horses contributed to our success in July.  Fine Lady is my lead horse, but every horse in my string has played a part in this ranking.”

“Thank you to the Ziegler family of Artisan Farms for their unwavering support, and thank you to my staff for all of their hard work; this achievement truly is a team effort,” said Lamaze, who was last ranked in the top ten in September of 2012.  “I would also like to congratulate Tiffany Foster on moving up to number 32 in the world.  I remember when Tiffany was excited to be ranked number 500 in the world, so for her to now be on the verge of breaking into the top 30 is quite an accomplishment.  It’s always rewarding to watch people that you have helped move forward and get ahead in the rankings.  I’m very proud.”

Lamaze continued to speak to the importance of being ranked so highly in the world, saying, “It’s a big achievement as Canadians, especially considering we don’t have the luxury of doing as many Nations’ Cup events as other riders who are competing in Europe, so our world rankings are based mostly on grand prix competition.  We are very fortunate to have a venue like Spruce Meadows hosting so many world ranking classes, which really helps any rider who competes there to move up in the rankings.”

For Lamaze, regaining a position in the top ten is especially exciting as he prepares to compete in Rio alongside Yann Candele of Caledon, ON and Tiffany Foster of North Vancouver, BC, both of whom he trains, as well as Amy Millar of Perth, ON.  Another one of Lamaze’s students, 20-year-old Kara Chad of Calgary, AB, is the traveling reserve.

“We are feeling really good, especially after Fine Lady won two classes and Tiffany and her Olympic horse, Tripple X III, placed fifth in the €1,000,000 Rolex Grand Prix in Aachen,” said Lamaze.  “Amy’s horse has had a strong season and while Yann has sacrificed showing in some of the bigger events this summer, his horse’s competition schedule has been carefully planned with the Olympics in mind.  We have a strong reserve rider in Kara Chad, and know she can deliver should we need to call on her.”

“I did it once on Hickstead, who was a favourite to win,” said Lamaze of his individual chances.  “In London, due to the circumstances, I was asking a young horse to do big things; I felt I was just participating and supporting the team.  This time, I’m going with a horse that can compete.  I feel really good about it.”

Lamaze will compete at the CSI5* Global Champions Tour in Valkenswaard, The Netherlands from August 5 to 7 with Chacco Kid and Check Picobello Z.  Then he and Fine Lady 5 head to Rio de Janeiro, where Olympic show jumping competition begins on Sunday, August 14.