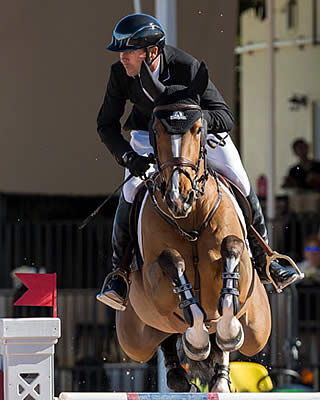 Riding Fine Lady 5, Lamaze was one of 29 entries to jump clear over the track set by course designer Santiago Varela of Spain. Returning 15th in the jump-off order, Lamaze used Fine Lady 5’s naturally quick pace to full advantage, turning in a blistering time of 36.60 seconds to move to the top of the leaderboard. His time would prove unbeatable, with Todd Minikus of the United States coming closest riding Quality Girl in a time of 37.42 seconds. Lamaze’s 2015 Pan American Games gold medal teammate and fellow Artisan Farms rider, Tiffany Foster of North Vancouver, BC, took third with a time of 37.77 seconds riding Victor for owner Artisan Farms and Torrey Pines Stable.

“I thought the course was nice but it walked a little bit light for a five-star and for that kind of money,” explained Lamaze. “In the end, there were a lot of clears. The jump-off almost became another class so the strategy was quite simple. Whenever you are in a jump-off like that, you basically just go as fast as you think your horse can go and hope that some of the forward distances keep showing up. With her, I can really trust her and show her some hard angles and believe that she will do the right thing. I was on the right horse for a jump-off with so many in it.

“I don’t think there is a rider who is going to tell you they didn’t take any risk going at that speed in the jump-off,” continued Lamaze, who left many onlookers, including his fellow competitors, in awe of his incredible performance. “A lot of it becomes about risk and what you are willing to risk. That is how you win these classes.”

Having already won two Ruby et Violette WEF Challenge Cup classes with Rosana du Park and one with Check Picobello Z, who went on to win the $216,000 Ariat Grand Prix later the same week, it was Fine Lady 5’s time to shine. The 13-year-old Hanoverian mare (Forsyth x Drosselklang II) is currently favoured by Lamaze for a trip to the upcoming 2016 Rio Olympic Games, but his choice of Olympic contenders is not limited to one horse, thanks to the support of owners Andy and Carlene Ziegler of Artisan Farms.

For Lamaze, the success of his students is equally important as his own. In addition to Foster’s third place finish, their fellow Pan Am Games gold medalist Yann Candele of Caledon, ON cracked the top ten riding First Choice 15 for The Watermark Group while Kara Chad, 20, of Calgary, AB, was also a jump-off contender riding Bellinda.

“I was really happy with Tiffany being third and another student, Kara Chad, was also in the jump-off,” said Lamaze, 47. “Yann Candele finished tenth and another student, Elizabeth Gingras, had to go first and finished with a very fast four faults to qualify for the grand prix on Saturday night. As a group, I am really proud and happy that everybody did so great. We have a plan, and I think everybody on our whole team is really coming together. It means as much to me as winning.”