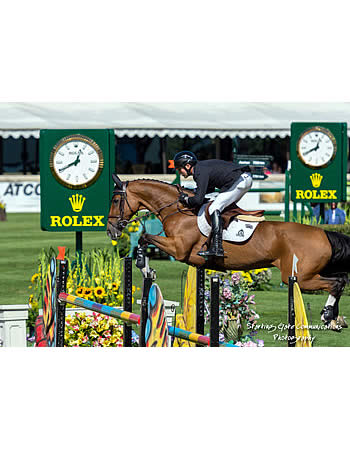 Lamaze and Fine Lady 5 entered the $35,000 ATCO Structures & Logistics Cup as the defending champions, having taken the win last year. Lamaze had also been victorious in the same event in 2011 with Coriana van Klapscheut.

This year, the Canadian Olympic Champion faced a starting field of 40 challengers in his quest to defend his title. When a total of 17 riders cleared the first round track set by two-time Olympic course designer Leopoldo Palacios of Venezuela, Lamaze had his work cut out for him. A competitive jump-off saw Canadian Olympian Lisa Carlsen of Spruce Grove, AB move into the lead after crossing the timers in 39.88 seconds riding Worlds Judgement. Her time at the top would be short-lived, however, as Lamaze guided Fine Lady 5 around the jump-off track and through the timers in 39.70 seconds to take the win.

“This is an event that is always won by a really fast horse,” said Lamaze, who is the all-time leading money winner at Spruce Meadows with earnings totalling more than $4.3 million to date. “Fine Lady is very fast. It doesn’t matter what people tell you about how fast the person was before you; you know you always have a chance with her to beat it. With some horses, you know it is not possible, but with her, it is always possible.”

Lamaze has been partnered with the 12-year-old Hanoverian mare (Forsyth x Drosselklang II) since the spring of 2014 when owners Andy and Carlene Ziegler of Artisan Farms LLC purchased her from Germany’s Holger Wulschner.

On Saturday, Lamaze will ride Fine Lady 5 as Canada attempts to defend its title in the $300,000 BMO Nations’ Cup. Lamaze will ride alongside Yann Candele of Caledon, ON, Tiffany Foster of North Vancouver, BC, and Ian Millar of Perth, ON as members of the Canadian Team.