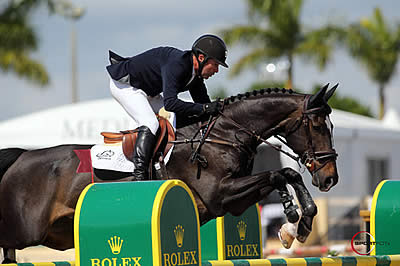 Live streaming of Saturday night’s $100,000 Engel & Völkers Grand Prix CSI 4* will be featured on The Chronicle of the Horse website:

Course designer Olaf Petersen, Jr. (GER) saw 95 competitors over his first round track in Thursday’s WEF Challenge Cup. A tight time allowed in the first round yielded ten entries with single time faults and 19 more were able clear the course without fault to qualify for the jump-off. Four entries opted out of the second round, where fifteen continued on over the short course with five double clear rounds.

Jonathan McCrea (USA) and Candy Tribble’s Special Lux were first to jump-off and eventually finished fourth with their time of 39.11 seconds. Gabriela Mershad (USA) posted the next clear round in 42.60 seconds to earn fifth place honors with Mershad Stables LLC’s Skara Glen’s Basel. Beezie Madden was next with Abigail Wexner’s Simon, and raced through the course in 38.78 seconds, which eventually finished third. Immediately following, Eric Lamaze and Artisan Farms LLC’s Zigali P S stole the lead in 37.59 seconds. The only other jump-off competitor to clear the short course, Lorenzo de Luca blazed through the timers in 37.66 seconds, securing the second place prize with T&L NV’s Elky van het Indihof.

After his win, Lamaze noted that he almost didn’t even show in Thursday’s class when it started off with a string of clear rounds, but he made the decision to go anyway, and it paid off in the end. “At first I wasn’t going to go in because the first four were clear and I am pre-qualified for the grand prix, so I was thinking I was going to do the 1.45m tomorrow,” Lamaze laughed. He has a new string of horses this year and is carefully planning each horse’s show schedule and taking time to get to know them.

“They are new horses for me. Zigali I just got just before I came here,” Lamaze stated. “I liked everything about him from the beginning. He came close to winning a few times this winter, but it just didn’t happen. As I get going fast in the jump-off with him towards the end, I need to get to know him a little better, but he is a fantastic horse. He feels to me like he comes back in the second round like a winner. He gets better for the second round.”

“I took some time off and Artisan was nice enough to purchase some young horses for me to make up, but I got quickly over that and then wanted to get back in the real sport,” Lamaze said of his new starting line-up. “They were so generous to purchase Powerplay for me, which I love, and then Zigali afterwards and Quelmec (du Gery) as well, so I am back with a string of horses to compete.”

“Zigali, I can’t ask for more,” he continued. “I knew the horse was a winner, but this is a time where you can’t buy success in a way. In the sport there are great riders, there are great horses, but you have to be a match with a horse. You can’t buy success unless you become a match with the horse. I am a great believer in that. With Zigali, as with Powerplay, I think I made a great match with these horses. Powerplay is more of a championship horse. He has big scope and everything else, but this horse is a real competitor for modern day grand prix.”

The day’s jump-off provided a big track for the horses to really open up their strides and gallop, which suited Zigali and Lamaze perfectly.

In addition to the prize money in Thursday’s class, Lamaze earned a special $3,000 bonus as part of the SSG ‘Go Clean for the Green’ promotion for wearing his SSG ‘Digital’ Riding Gloves. Each week of the Ruby et Violette WEF Challenge Cup Series, a $3,000 bonus will be awarded to the winning rider if they are wearing SSG ‘Digital’ Riding Gloves in all rounds of competition with the SSG logo clearly visible.

After over a year away from the show ring, On The Town proved he hadn’t missed a step after being crowned division champion of the CWD Saddlery Performance Hunter 3’6″ with Elizabeth Solter at the FTI WEF. Solter, of Berlin, MD, rode the nine-year-old Brandenburg gelding owned by Lysa Burke Horkan to a blue ribbon finish under saddle in addition to second, seventh, and first over fences.

Solter has ridden On The Town for several years, contesting the First Year Green Hunter division for the horse’s previous owners. The pair picked up several notable wins, including the reserve championship title at the prestigious Devon Horse Show (Pa.). Current owner Burke Horkan then bought the gelding, but took a hiatus from the show ring for the last year and a half and asked Solter to help her get On The Town back in shape.

“He’s really like a first year green horse, experience-wise,” Solter explained. “Not his attitude or ability, but show ring-wise.”

She continued, “He’s been good. Each week he’s gotten better and better. He has a lovely attitude, a big step, and a really good front end. He’s a pretty sweet horse.”

Solter described the gelding as consistent and affectionate, with one of the best attitudes of any of the horses she rides. He settled back into life in the show ring quickly, and Burke Horkan hopes to get back in the saddle soon.

Solter agreed that On The Town has always possessed a puppy-dog personality, adding that the horse is just as fun in the ring as he is in the barn. “He has a real smooth canter. He’s really comfortable to ride, and he’s really brave about the jumps. He’s got lots of scope. He’s really fun to ride,” she smiled.

Burke Horkan added, “Elizabeth and I have known each other for more than 20 years, probably close to 30 at least. I love having her ride him.”

Competition for the eleventh week of the FTI WEF, presented by Artisan Farms, continues on Friday with the George Morris Excellence in Equitation Championship, presented by Alessandro Albanese. The class begins at 4:30 p.m. in the International Arena on the Main Grounds of PBIEC. For full results, please visit www.showgroundslive.com.