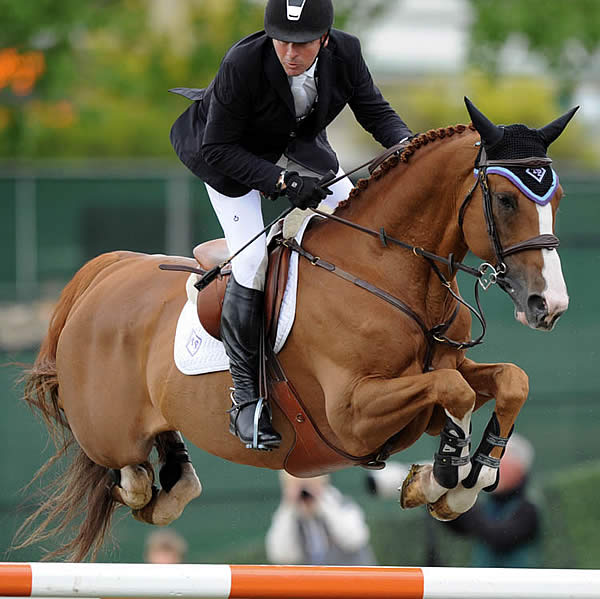 While Lamaze has welcomed two new international mounts to his stable in recent weeks, it was his partner of almost two years, Wang Chung M2S, that carried him to Sunday’s victory.  The pair had the advantage of going second to last in the starting order, knowing they had to better the time of 85.33 seconds set by Reed Kessler of the United States.  Catch her time they did, cruising through Werner Deeg’s course in the International Ring in a time of 84.73 seconds.  When the final rider, Brianne Goutal of the U.S., proved to be no threat, Lamaze claimed his first victory of the Spruce Meadows summer series.

“We’re out at Spruce Meadows with some young horses and new horses; this horse is the only one left of my old string, so I know him better than the others,” said Lamaze, 45.  “This competition really suited him well and I am very happy with the outcome.”

The all-time leading money winner at Spruce Meadows with earnings in excess of $3.7 million at the Calgary venue alone, Lamaze is no stranger to hoisting the winner’s trophy in the International Ring.  For his victory in the $40,000 ATCO Structures & Logistics Cup, Lamaze added another $13,200 to his overall winnings.

“I use him quite a bit in the speed competitions so I know him quite well,” said Lamaze of the 10-year-old Irish-bred Dutch Warmblood stallion (Royal Bravour x Ahorn) owned by Morningside Stud of Ireland and Lamaze’s Torrey Pines Stable.  “He’s very dependable in the short turns and he has a huge gallop so, on this field, it was advantage.”

In addition to Wang Chung M2S, Lamaze has recently added two new international mounts to his string.  Owners Carlene and Andy Ziegler of Artisan Farms purchased Powerplay, the former mount of Swiss rider Pius Schwizer, and Quelmec de Gery, formerly under the saddle of France’s Penelope Leprovost, days before the Spruce Meadows “National” opened.  Lamaze made his competition debut with both nine-year-old geldings this week at the Calgary venue.

“I was thrilled with both of the horses in our first week competing together,” said Lamaze who plans to ride one of his two new mounts for Canada in the Nations’ Cup competition on Thursday, June 13.  “I didn’t have any sort of practice prior to coming to Spruce Meadows.  It’s hard enough to ride any horse that’s never been in the International Ring, let alone a horse that is new to its rider, so I was super happy with how it went.  I just took it easy, I’m just getting to know them, but I’m very happy with how everything felt.”

Hailing from Schomberg, ON, Lamaze now divides his time between training bases in Wellington, FL, and Vrasene, Belgium.