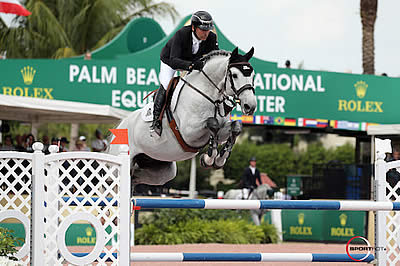 Belgium’s Luc Musette set the course for 79 starters at the Palm Beach International Equestrian Center (PBIEC) on Thursday, with 15 entries qualifying for the jump-off, and 13 moving on to the short course.

The jump-off had three clear rounds, the first of which was set by Molly Ashe (USA) and Maarten Huygen’s Audi’s Dimple in 42.60 seconds. Leslie Howard (USA) and GJ Stable’s Gentille van Spieveld followed, crossing the timers in 41.38 seconds. Lamaze with Artisan Farms and Torrey Pines Stable’s Houston then took the lead in 40.55 seconds.

Houston, a ten-year-old Belgian Warmblood stallion (Heartbreaker x Corofino), is an up-and-coming mount for Lamaze that was purchased by Artisan Farms at the start of 2015. The young horse has steadily progressed and ended the 2016 season with clear rounds at both the La Coruña CSI 4* and Stephex Masters CSI 5* events.

“It is a horse that really came off strong towards the end of last year,” Lamaze detailed. “He is an upcoming horse, and he is a stallion, so you have to ask things nicely. He has all the talent in the world, but with my string of horses, he never truly had a chance to show off last year other than to get some great mileage at a lot of competitions. This is his time to step up, and we could not be happier with how it is coming along.”

Commenting on his winning round, Lamaze detailed, “I was very surprised with how big of a stride Houston got. I thought eight strides from fence two to three in the jump-off would be very forward, but it was normal for me. I almost asked myself if I did nine. I knew I had to slow down a little bit for the double, and I just let him come home. He put a brilliant effort in at the last fence. A lot of the time we invest years, and the owners invest money and time, into bringing these horses along, so it is nice when you finally get there.”

Lamaze will jump Saturday night’s $130,000 Adequan® Grand Prix CSI 3* with Fine Lady 5, which he rode to an individual bronze medal at the 2016 Olympic Games in Rio de Janeiro, Brazil, as well as the win in the Rolex Top 10 Final at CHI Geneva (SUI) in December. He looks forward to jumping the track set by Luc Musette, noting, “He is a top-class course designer, having just finished building the Rolex competition in Geneva. He gets asked to do the biggest competitions in the world, so it is no surprise that he can come here and make this a good competition for everyone.”

Kelley Farmer, of Keswick, VA, and Because, owned by Jane Gaston, were almost flawless in the Equine Tack & Nutritionals Green Hunter 3’9″ division. The pair won all four over fences classes and placed fourth under saddle for the championship title. Farmer and Because earned an impressive 96 in the stake and a pair of 90s in the over fences classes.

Because is a coming ten-year-old KWPN stallion by Verdi that Gaston purchased almost a year ago from Daniel Geitner. Both Gaston and Farmer earned coveted tri-color ribbons with Because during the 2016 indoor finals circuit. Most recently, during WEF 2, Farmer and Because were also named champions of the Green Hunter 3’9″ division with notable scores of 94, 92, and 90.

“He’s an amazing, amazing animal,” Farmer said. “I can’t say enough about him. He’s a complete ham, a total sweetheart, and he wants you to spoil him. He shows with Jane in the Amateurs and he goes absolutely beautifully.”

Gaston and Because were also named reserve champion of the Hunt Ltd. Amateur-Owner Over 35 division during week two.

“He’ll show a little bit with me and more with Jane,” Farmer said. “We’ll do week six, World Championship Hunter Rider (WCHR) week, where he’ll go with both me and Jane. Now that he’s gotten into circuit and into the groove a little bit, he’ll probably show a little less with me, except for the derbies.”

Scott Stewart, of Wellington, FL, guided Fashion Farm’s Captivate to the reserve championship. The pair placed first under saddle, second in the handy, third in the stake, and third and fourth over fences. Captivate is a 2009 Westphalian gelding by Captain Fire that Stewart has ridden since April of 2015.

The third week of WEF continues on Friday featuring the FEI $35,000 Illustrated Properties 1.45m in the International Arena. Also on Friday, the Triple Crown Blankets Adult Amateur Hunter 36-49 Section A championship will be decided. For full results, please visit www.PBIEC.com.