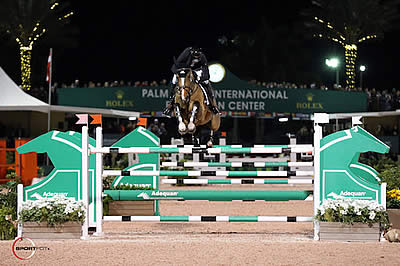 Belgium’s Luc Musette built the course for Saturday night’s grand prix under the lights in the International Arena at the Palm Beach International Equestrian Center (PBIEC). Forty-three entries contested the first round track, with seven advancing on to the jump-off, and three double clear rounds.

Lamaze and Fine Lady 5 concluded a banner 2016 season with a win in the Rolex Top Ten Final at CHI Geneva (SUI) in December before a short rest and gearing up to compete this winter.

“She felt really good tonight,” Lamaze said of the 14-year-old Hanoverian mare (Forsyth FRH x Drosselklang II). “I gave her a long rest after the Olympics, and then started back and just did Paris and Geneva. I plan on using her quite a bit at the beginning of the circuit here since she is fit from Geneva already. Then we will give her a rest before returning to Europe.”

Fine Lady’s quick foot speed carried the pair easily through the jump-off track, and Lamaze remarked on the long gallop home to the final oxer on course.

“You need to have the distance in front of you to be fast,” he noted. “If there is something in front of you, you take it. One pull and I’m easily third or maybe fourth.”

He added, “This was a difficult course, but she has done some very big classes lately. This was hard, but for her but it was a little bit of an easier class.”

Michaels-Beerbaum was happy with the progress that her mount, an 11-year-old Oldenburg gelding (Coupe de Couer x Baloubet du Rouet), has made since last winter in Wellington.

“I think Fine Lady is a really fast horse, and Comanche is just learning to go fast,” she stated. “I was very happy with him tonight. Comanche, I believe over the last year, has gained a tremendous amount of experience. He has always been a fantastic jumper, but he has been slightly green in the ring and a little bit spooky. Over the last year he’s been to shows all over the world, and I think that has helped him. I think he has grown up a lot, and tonight you could really see he gained a lot of self-confidence.”

Michaels-Beerbaum applauded Lamaze on his victory, adding, “It is a great honor to sit next to this guy and to be second to him by just a tiny bit.”

Moya stated, “I was very confident with her. She has never been under the lights, but she is always great. She tries her best, and she never doubts anything. She is naturally very fast, so I did not want to override the jump-off. It was not an easy class, and it is an honor to be next to Eric and Meredith. I am very happy with my third place.”

Allyn Mann, representing class sponsor and week three title sponsor Adequan®, was on-hand for the night’s event and remarked on the competition.

“What an honor to be sitting here with Eric, Meredith, and Sergio,” Mann stated. “The beauty of these equestrian disciplines is that it is an acknowledgment of these animals and what we ask them to do. Tonight was a wonderful example of that. We are honored and humbled by the opportunity to help the health and well-being of the horse so that these riders can go out and do what they love to do, which is to compete.”

Michaels-Beerbaum was also presented the award for Leading Lady Rider for week three, the award sponsored by Martha Jolicoeur of Douglas Elliman Real Estate in memory of Dale Lawler.

On Saturday, Augusta Iwasaki of Calabasas, CA and Small Affair claimed their third championship in a row in the Engel & Völkers Large Junior Hunter 15 & Under division at WEF. In the past three weeks, the pair has won ten over fences classes. This week, they took the blue ribbon in three over fences classes, placed second in another, and finished fifth under saddle.

Small Affair, owned by Lyn Pederson, is a coming 14-year-old Selle Francais gelding by Elf d’Or. Iwasaki started riding him almost exactly a year ago and has shown him all over the country.

“He’s kind of grumpy,” said Iwasaki of her accomplished hunter mount. “He likes to keep to himself, and he thinks he’s the best.”

Iwasaki, who is just 12 years old, splits her time between riding in the pony divisions, Junior Hunters, and equitation classes. She is looking forward to hopefully showing in the USHJA/WCHR Peter Wetherill Hunter Spectacular during week six.

When asked which division she enjoys showing in the most, Iwasaki responded, “The Junior Hunters, for sure.”

The third week of WEF concludes on Sunday with the $35,000 Suncast® 1.50m Championship Jumper Classic in the International Arena. The Small Junior Hunter 15 & Under division will award championship and reserve honors in the E. R. Mische Grand Hunter Ring. For full results, please visit www.PBIEC.com.