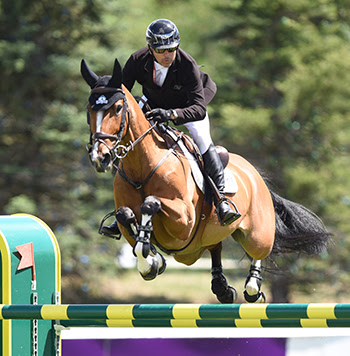 Riding Fine Lady 5, the 15-year-old Hanoverian mare (Forsyth x Drosselklang II) his Torrey Pines Stable owns in partnership with Andy and Carlene Ziegler’s Artisan Farms, Lamaze was one of seven riders to jump clear and qualify for the jump-off over a testing track set by course designer Guilherme Jorge of Brazil.  In the same scenario as Friday night’s Scotiabank Cup, Lamaze was chasing the jump-off time posted by young American Lucy Deslauriers and Hester when he entered the ring.  And in a repeat of Friday night, Lamaze was again faster, stopping the clock in 43.22 seconds compared to the 43.66 posted by Deslauriers.

Lamaze is using the Spruce Meadows Summer Series consisting of four weeks of CSI5* competition, the highest level of show jumping competition sanctioned by the Federation Equestre International (FEI), to prepare for September’s FEI World Equestrian Games in Tryon, NC.  When Fine Lady 5 was originally purchased in the spring of 2014 from Germany’s Holger Wulschner, she was not intended to be used for 1.60m grand prix competition.

“Fine Lady was purchased as a speed horse, as a 1.45m/1.50m ranking horse,” explained Lamaze, who is based in Wellington, FL and Brussels, Belgium.  “Prior to the Rio Olympics, we stepped her up and put her in some big competitions here at Spruce Meadows in the Summer Series and she just blossomed.  Then we moved her up at Aachen and she won.  At the Olympics I couldn’t believe it; the final round was big and although I wouldn’t say she jumped it easily – none of the horses jumped it easily – she jumped it.  It was a very pleasant surprise.

“Any horse that did well in recent major championships, the ones that ended up on the podium at an Olympics or World Championships, most of them came here in the summer time and trained for the four weeks,” continued Lamaze.  “In a year when there is a world championship, there is no better place to prepare than the Spruce Meadows Summer Series.  It makes you a better rider.  This Summer Series serves us on many levels.  It’s good for developing younger horses and younger riders and it also prepares more experienced combinations for major championships.”

As Fine Lady 5 is his intended mount for the World Equestrian Games, Lamaze is choosing her classes carefully.  He will now rest the mare for two weeks before bringing her out to contest the Spruce Meadows ‘North American’ tournament from July 4 to 8.

“I love coming to Spruce Meadows; we have real competition here,” said Lamaze, who is the all-time leading money winner at the Calgary venue.  “It’s the only venue in Canada that I come to.  This facility has been very good to me.  And I love competing in front of our fans.  It feels like home.”

Lamaze will now have a week off from competition before returning to Calgary for the back-to-back Spruce Meadows ‘Pan American’ and ‘North American’ tournaments.