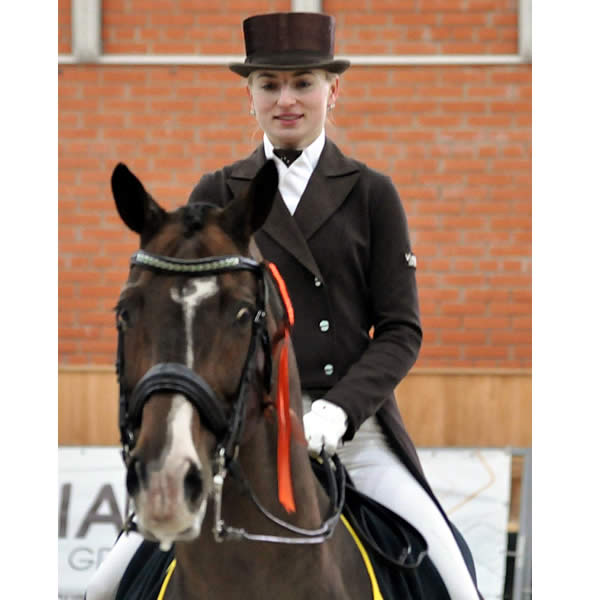 Wild-cards have been issued and accepted, and competitors from the host nation of Sweden are expected to be joined by representatives from Denmark, The Netherlands, Germany, Ukraine, Russia, Canada and Norway when the action gets underway at the Scandinavium Arena in Gothenburg, Sweden on 24 April.

The two qualifying spots up for grabs at Zhashkiv were claimed by Ukraine’s Inna Logutenkova and Russia’s Tatiana Dorofeeva.  Logutenkova finished seventh, and Dorofeeva fourth at the end of the eight-leg Central European League qualifying series which saw Katsiaryna Varchenia and Sviatlana Loika from Belarus jointly topping the leaderboard.

Loika did not line out in Zhashkiv over the weekend, but Varchenia joined four others in the Grand Prix Kur won by Logutenkova and Stallone who scored 71.750. And when Dorofeeva posted 70.6000 with Khorovod, then Varchenia had to settle for the reserve qualifying spot with Redford whose mark of 69.675 was only good enough for third place.

This was no fluke result as 26 year old Logutenkova finished second with Stallone and third with Don Gregorius at Zhashkiv CDI-W last May while 48 year old Dorofeeva was victorious with Khorovod at CDI-W Moscow in September.

It was Canadian Olympian, David Marcus from Campbellville, Ontario, who won the FEI North American FEI World Cup Dressage league, but he has declined the opportunity to compete, and the regional qualifying places will now be taken up by fellow-Canadians Jacqueline Brooks and Jaimey Irwin.

The North American places are decided on an average score system rather than on points, and, riding Chevri’s Capital, Marcus accumulated the highest average score ahead of Brooks and her 14 year old Swedish warmblood gelding D Niro.

Brooks got an early grounding in equestrianism while grooming for Canada’s Ashley Holzer at the Pan Am Games in Havana, Cuba in 1990 and is now a double-Olympian. She followed the London 2012 Olympic Games with training in Florida, USA under Holzer’s eagle eye and achieved good results over the winter months at Devon in Pennsylvania, USA, the Royal Winter Fair in Toronto, Canada and the Global showgrounds in Wellington, Florida.

Irwin also achieved good scores at Devon, Wellington and CDI-W Loxahatchee and will compete with the 16 year old Lindor’s Finest, a Canadian-bred Dutch warmblood which he first got to ride last summer. The 35 year old athlete has trained with German coach, Holger Munstermann, throughout his career.

Meanwhile the withdrawal of Australia’s Lyndal Oatley sees no representative from the Pacific League.  Oatley has pulled out on veterinary advice following a minor injury to her horse, Sandro Boy.

Her disappointment however opened up an extra starting place which has been awarded to Marlies van Baalen who will join Edward Gal and double defending champion Adelinde Cornelissen in flying the Dutch flag.

A total of 12 riders are now confirmed from the Western European League including Germany’s Helen Langehanenberg, Kristine Sprehe and Isabell Werth, Sweden’s Tinne Vilhelmson-Silfven, Patrik Kittel and Minna Telde – the latter getting in on a wild-card – Denmark’s Anna Kasprzak and Danish counterpart and wild-card recipient, Sidsel Johansen, whose performances with Schianto have been a big hit with the crowds this season.

Italy will be represented by Valentina Truppa and Switzerland by Marcela Krinke Susmelj, while 2012 Norwegian Dressage Champion, Lillann Jebsen, yesterday accepted a wild-card invitation.  And the Canadian Federation has applied for a wild-card entry for Pia Fortmuller who will be next on the list should one become available.

FEI World Cup Dressage, the only worldwide series in this discipline, has entered its 28th season. The series, created in 1985, comprises four leagues: Western European, Central European, North American (including Canada) and Pacific (Australia, New Zealand, Asia). Each FEI World Cup Dressage qualifier consists of a Grand Prix test, which in turn is a qualification for the Freestyle to music competition, where league points are accumulated towards places in the Final. Judged on both technical and artistic merit, the FEI World Cup Dressage combines art, sport and partnership between horse and rider at the highest level and consistently proves a winning formula with audiences all over the world.

The Federation Equestre Internationale (FEI), founded in 1921, is the international body governing equestrian sport recognised by the International Olympic Committee (IOC) and includes 133 National Federations. Equestrian sport has been on the Olympic programme since 1912 with three disciplines – Jumping, Dressage and Eventing. In 2012 equestrian sport will celebrate its centenary as an Olympic sport. It is one of the very few sports in which men and women compete on equal terms. It is also the only sport which involves two athletes – horse and rider. The FEI has relentlessly concerned itself with the welfare of the horse, which is paramount and must never be subordinated to competitive or commercial influences.