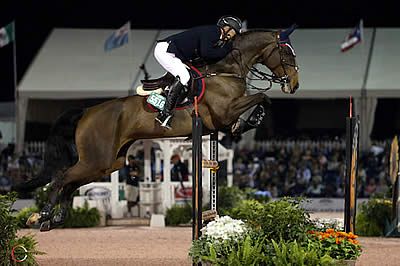 Kellogg Sadrian Makes Her Return to WEF a Winning One

Gonzalez was next to go, completing the first double clear round in 40.36 seconds for the win aboard Chacna. Kara Chad (CAN) and Torrey Pines Stable’s Gin Tonic vd Haagakkers, cleared the track in 44.13 seconds to place fourth. Laura Kraut and the Evita Group’s Nouvelle followed with the third place time of 41.35 seconds.

Beezie Madden (USA) had the time in 40.12 seconds on Abigail Wexner’s Breitling LS, but dropped the front rail of the final oxer to end sixth. Engle went next, racing through the timers in 41.02 seconds riding Griese, Garber, Hidden Creek, and Gladewinds’ Indigo to land the second place prize. Last to go, Daniel Coyle (IRL) knocked one rail with Ariel and Susan Grange’s Cita, but clocked the fastest round of the night in 39.49 seconds to secure fifth place honors.

“The last year has been really good. She learned a lot, and she improved a lot,” Gonzalez said of the ten-year-old Hanoverian mare (Chacco-Blue x Narew XX). “Now I think she is ready to really compete at this level. She has never shown here, and she has never shown in a night class in an open place like this. I really wanted her to go tonight to be ready for the coming weeks.”

Gonzalez last competed at the Winter Equestrian Festival in 2011, and this was his first grand prix win at PBIEC.

“We are here for the whole season, so it is definitely a very nice way to start, and hopefully we can keep it up for the rest of the season,” he stated.

Following the WEF circuit, Chacna may have a trip to the FEI World Cup Finals in her future, as Gonzalez is currently leading the West Coast standings and qualified to compete in April.

For Engle, Saturday night was a great result with longtime partner Indigo, a 17-year-old Dutch Warmblood gelding by Indoctro.

“He doesn’t know he’s any older,” Engle remarked. “He acts younger than most of my young horses. He gave it a shot (in the jump-off), and I went as fast as I could at the beginning. I may have gone a little wide to the last fence, but he is always ready to go. He is very enthusiastic, and he always wants to go forward. He is still young at heart.”

Indigo jumped the first two weeks at WEF and will now have a few weeks off. Engle said, “He doesn’t owe me anything. He probably won’t show a lot the rest of the season. It gets bigger and bigger as it goes on, and now that he’s older I pick my spots with him. He’s been a great horse for me.”

Kraut was going for the win Saturday night, but was happy with her finish aboard Nouvelle to start the circuit. This was the first week jumping since the beginning of November for the 13-year-old Dutch Warmblood mare (Solitair x Contango).

Commenting on her jump-off, Kraut detailed, “I knew Enrique was fast. I went as fast as I could. I just messed up that last turn; I started to turn too early. She made a heroic effort over that jump to not knock it down, because I did everything in my power to knock it down. I think I probably lost it there.”

Also competing in the International Arena on Saturday, the Hollow Creek Farm Under 25 Grand Prix Series got underway with its first of ten events offering a total of $215,000 in prize money for the WEF circuit.

The $10,000 Hollow Creek Farm Under 25 Welcome was held as a one round speed class, with 62 entries and 22 clear rounds. The win went to USA’s Lillie Keenan riding Chansonette Farm LLC’s Be Gentle through the timers in 60.84 seconds. Richard Neal (USA) and Ida Gold placed second in 62.00 seconds, and Emanuel Andrade (VEN) finished third with a time of 62.15 seconds aboard Cortina 186.

Kellogg Sadrian Makes Her Return to WEF a Winning One

On Saturday, Lee Kellogg Sadrian, of New York, NY, returned to WEF for the first time in five years to claim championship honors in the Osphos® Amateur-Owner 3’3″ 36 & Over division. Aboard her own Sochi, Kellogg Sadrian won three over fences classes with impressive scores of 90, 89, and 87, while also placing third in the final jumping class and eighth under saddle. What made Kellogg Sadrian’s success even more special though, was that this was only her third show with Sochi.

Kellogg Sadrian purchased the coming eight-year-old Holsteiner gelding by Quirado two years ago, while living in California. John French competed Sochi in the First Year Green Working Hunters during the 2015 season and was champion of the division at the 2015 Washington International Horse Show. Unfortunately, Sochi injured himself while turned out later that fall. It was not until December of 2016 that Sochi returned to the show ring.

“He loves to show,” Kellogg Sadrian said. “He’s perfect in the ring, but he can be a little funny outside the ring. He’s sweet and kind, but when schooling his attitude is more like, ‘Why are you making me do this?’ In the ring though, he’s all business. It’s so fun because you can jump the first fence, any fence, every single fence, and he’s amazing. I’ve never had a horse that’s so amazing in the air. He’s just so much fun.

“I’m excited to be back and this is a great way to start,” Kellogg Sadrian said.

The second week of WEF ends on Sunday with the $35,000 Suncast® 1.50m Championship Jumper Classic and the $25,000 Hollow Creek Farm U25 Grand Prix, both in the International Arena. The Adequan® Amateur-Owner Hunter 18-35 3’3″ will award championship and reserve honors in the E. R. Mische Grand Hunter Ring. For full results, please visit www.PBIEC.com.