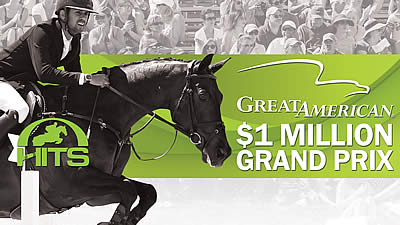 The Seventh Annual Great American $1 Million Grand Prix, on Sunday, March 22, is less than a month away. The richest Grand Prix in America will feature a great group of Grand Prix veterans and rising stars, including nearly a dozen past Olympians and a dozen more Olympic hopefuls. This year’s Great American Million is an event you don’t want to miss.

Day VIP Passes are $150 per person and include lunch buffet with beer and wine service.
Day VIP seating will be open style seating in a covered tent overlooking the Grand Prix Stadium.
Day VIP Passes must be purchased in advance and are not refundable.

For more information, contact the Horse Show Office at 352.620.2275 or info@hitsshows.com.