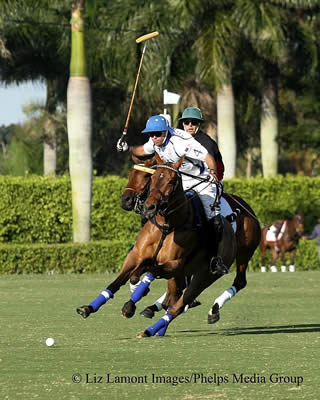 Enigma Polo Team won their second overtime game in a row 12-11 over Valiente to advance to the Ylvisaker Cup quarterfinals with a strong second place finish in the Bracket III/IV cross section. Enigma patron Jerome Wirth scored two key goals in the sixth chukker to lead the team back from a four-goal deficit.

Enigma player Matias Macdonough commented after the match: “We knew were in the quarterfinals but it is a battle to win always. We lost one game in this tournament in overtime and won the last two games so it is nice to win today. With Jerome scoring in the sixth chukker like he did – it was great.”

The first chukker started out even with the teams trading goals. Enigma closed out the chukker with a well-executed set play off a penalty five. Matias Macdonough hit a strong shot down field to a running Carlucho Arellano, who finished off the neck shot, putting Enigma up 3-2.

The teams were neck-and-neck throughout the second chukker and closed it out tied 4 all. At that point, Valiente steadily pulled away throughout the third chukker, tallying three goals from Sapo Caset, one from Santi Torres and one from young Peke Gonzalez. Gonzalez played very strong defense throughout the match in addition to his scoring effort. Valiente closed out the first half with a commanding 9-5 lead.

The scoring proceeded at a staid pace through the fourth and fifth chukkers, with both teams unable to score from the field and tallied only penalty conversions. Valiente maintained their four-goal lead heading into the sixth chukker at 11-7 over Enigma, and that is when things got a little Western.

Wirth got things moving again for his team by winning a lineup by the boards and running the ball into goal. That was followed by an Arellano penalty two conversion. Next, Macdonough ran another set play off a penalty five, hitting a pinpoint pass to Jeff Hall, who ran the corner and put the ball into goal. Valiente, with their momentum slipping away, suffered a costly error in the waning moments of the sixth chukker when a Valiente player was called for an uneven ride-off. Arellano hit the ensuing penalty four shot. The ball landed in a cluster of players and bounced directly to Wirth who calmly hit the ball into goal. All tied up, 11 to 11, the Enigma team was in a familiar scenario as the teams headed to sudden death overtime

In overtime, it took less than two minutes for a foul to occur and the Enigma team lined up at 60-yard line for penalty four with 6:10 on the clock. As players trickled back on the field from changing to spare horses, the umpires called play and Hall jumped on the penalty four in a sneak attack and ran the ball to goal, sealing the victory for Enigma.

Typically, Arellano takes the Enigma penalty shots and shoots instead of dribbles. After the game, Hall said regarding the decisive penalty four, “I could see they (the other team) were sleeping, so I said, ‘Let’s go!'”

Lucchese came out ahead of a determined Casablanca, winning 13-12 as the Ylvisaker Cup continued Thursday at the International Polo Club Palm Beach.

The game started with an automatic two points for Casablanca to compensate for its 18-goal handicap in the 20-goal match.

Casablanca’s play was uneven throughout most of the game, scoreless in chukkers two, three and four. Then it tied the game in the fifth and came on full force in the final chukker as the clock ticked down but lost by a single point.

Casablanca was looking good early in the game, making four goals from the field (two each by Guille Aguero and Mark Tomlinson) in the first chukker. Lucchese put in three goals (two from the field by Andres Weisz and one on a Nico Pieres penalty shot). At the end of the first chukker Casablanca was leading 6-3, but Magoo LaPrida tightened the spread, making it 6-4 at the end of the second.

LaPrida decided at that point to put his ponies on cruise control, moving at an even, fast clip to score at least once in every remaining chukker. He made nine of Lucchese’s total 13 goals and was in on most of the others. Three more LaPrida goals in the third chukker tied the game at 7-all. Casablanca was scoreless in the fourth chukker, while LaPrida made two more goals – the last of which he knocked in during literally the final second of the chukker, giving Lucchese a 9-7 lead.

In some kind of seismic shift, the fifth chukker played out as if it were an entirely different game. Casablanca moved into overdrive, with Aguero, Grant Ganzi and Juan Bollini each making a goal. Casablanca tied the game at 10-all, employing the same smooth teamwork that allowed all four Casablanca players to score during the game.

Heading into the sixth chukker, it looked like Casablanca might turn things around. Tomlinson made the first goal of the chukker, smashing the ball through the goalposts with such vigor that it flew out of sight, making a loud splash as it landed in the canal. But Lucchese quickly reasserted itself, making three goals to Casablanca’s two and ending the game 13-12.

Orchard Hill Defeats FlexJet 10-8 in Battle of the Brothers

The first chukker kicked off with two showmen in the form of brothers Gonzalito and Facundo Pieres, who scored back-to-back goals for their respective teams to tie the score 1-1. Several penalty conversion attempts by Facundo Pieres followed, but all went wide or were blocked. In an impressive partnership that continued throughout the game, Facundo Pieres sent a pass to Lucas Criado, who ran it down the boards. Remy Muller blocked the FlexJet defense, clearing the way for Criado, who scored, ending the chukker 2-1 for Orchard Hill.

In the second chukker Orchard Hill continued its stellar team play with another Pieres-Criado play, this time with patron Steve Van Andel blocking Cody Ellis. Facundo Pieres converted a penalty for a goal, making the score 4-1. FlexJet picked up steam in the third chukker when Gonzalito Pieres scored on a breakaway with an assist by Miguel Astrada. Melissa Ganzi followed up with a goal, also on an assist by Astrada, who showed his uncanny aptitude for strategic play throughout the match. On a continuous hot streak, Astrada scored on a neckshot, tying the score 4-all.

The second half opened with a FlexJet knock-in, followed by a penalty in favor of Orchard Hill, which Facundo Pieres scored with on the second attempt. (His first attempt had been blocked by Gonzalito Pieres, who umpires ruled had come through the goalmouth). The Criado-Pieres passing game continued in full force, with Facundo Pieres scoring while Criado held off the FlexJet defenders. Facundo Pieres made a penalty conversion, making the score 7-4.

Astrada’s next goal kept FlexJet within two points of Orchard Hill’s lead. Facundo Pieres made a drive into the goalmouth, only to be ridden off the line by his brother. Muller hit a neckshot to save the play and score, ending the fourth chukker 8-5. Ellis made a long drive downfield to score, again bringing FlexJet within two points of Orchard Hill. Facundo Pieres shot a pass to Criado, who drove it in for a goal, making the score 9-6 at the end of the fifth chukker.

Gonzalito Pieres showed off his superior ball-handling skills, knocking the ball out of mid-air and turning it around before shooting a pass to Astrada, who drove it in to score. Gonzalito Pieres then made a long drive down field to score, making the score 9-8. Facundo Pieres took off on a breakaway that turned into a ride-off with Astrada but decided to leave the ball for Muller. Muller swept in behind the pair to drive the ball in for a goal. The game ended with an impressive breakaway on the throw-in by Van Andel. He outran his defenders all the way to what looked like a goal in the works, only to have his shot go wide. Orchard Hill ended the game on top 10-8.

“They were on, and they hit some goals, and we missed them,” said Van Andel. “But we were better in the second half, and we pulled it out in the end.”

Muller called FlexJet a very tough team. “They line up well against us, but we survived,” he said.

For Criado, the high point was being on the field with the Pieres brothers. “To play with these guys is amazing!” he said. “They’re some of the best players in the world. For me, they’re in the top 10.”

In the fourth and final game of the day, Palm Beach Illustrated beat CT Energia 15-13 as the Ylvisaker Cup continued.

Palm Beach Illustrated turned the field at Everglades Polo Club into a play-by-play diagram of how to control a game. Still, its players had their work cut out for them from the get-go. CT Energia tried every move in the book (and even invented a few), trying desperately to gain ground until the final horn blew.

CT Energia started with a fleeting glimpse of hope, ahead 3-2 at the end of the first chukker. That lead was delivered by its pair of powerhouses, Kris Kampsen and Joao Paulo Ganon. Between the two of them, they scored all but one of CT Energia’s total goals in the game. (Its other point came from Alessandro Bazzoni in the fifth chukker.)

Palm Beach Illustrated turned everything on its head in the second chukker. The team effectively neutralized CT Energia, keeping it from scoring. Tommy Collingwood scored once from the field, and Obregon slammed in two penalty shots to seize a 6-3 lead. The whistle blew again and again at what seemed like regular intervals throughout the game. The result was some exciting, fast-paced plays punctuated by penalties.

Almost inexplicably, CT Energia came on like a steamroller in the opening minutes of the fifth. Ganon took the field with authority, scoring four consecutive goals in rapid-fire succession. On the last of those goals, every member of the CT Energia team had a hand in it. Despite the pressure, Palm Beach Illustrated remained unfazed, bouncing back with ease as Facundo Obregon and Jared Zenni whacked in two goals.

The final chukker opened with a 14-10 lead for Palm Beach Illustrated. Ganon and Kampsen both scored on penalty shots. Dorignac, whose performance has been exceptionally strong throughout the tournament, suddenly resurfaced in déjà vu mode. He came out of nowhere in his signature style and ran the ball through the goalposts, ending the game 15-13 for Palm Beach Illustrated.

The quarterfinal pairings in the Ylvisaker Cup will be determined Friday February 13, after the last remaining tie in Bracket I/II is broken by penalty shootout.