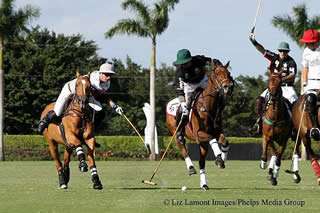 In an eleventh-hour battle that had everyone’s head spinning, Enigma and Palm Beach Illustrated chased each other up and down the field until Matias MacDonough swooped in to make the final play. With just 12 seconds left in overtime, he slammed in the tie-breaker to clinch a 14-13 victory for Enigma.

Even the winners seemed stunned as they rolled in from the field and dropped into their chairs. Before Jeff Hall and Carlucho Arellano had time to catch their breath, they locked eyes and stammered at each other: “What happened? What just happened?”

That’s what everyone wanted to know. The game was a thriller with more plot twists than an Alfred Hitchcock film. The first third played out in what turned out to be a deceptively benign manner, with the score tied at the end of both the first and second chukkers (1-1, then 3-3). Enigma came on exceptionally strong in the third and fourth chukkers, cruising into a three-point lead (the third chukker ended 7-4 and the fourth 9-6).

If you ask Hall, that’s when everything went askew. The fifth chukker turned the entire game on its head. Enigma was suddenly scoreless, stopped dead in its tracks by Palm Beach Illustrated, which scored six goals in the chukker. Much of Palm Beach Illustrated’s burst of firepower came from Facundo Obregon, who stormed the field with brilliance and determination. Until then, Obregon had been playing his usual consistent game, making one goal in each of the first four chukkers. In the fifth, however, he went Rambo, dominating both the offensive and defensive play and scoring three (of his total eight) goals. In that seven-minute shuffle, Palm Beach Illustrated doubled its score to 12 and snatched a three-point lead.

Obregon kept at it, scoring again at the top of the sixth chukker. But Enigma reasserted itself with four consecutive goals (three by Arellano and one by Matias MacDonough), ending the sixth chukker 13-13.

That’s when things really got interesting – and nerve-wracking, regardless which team one hoped would win. Overtime lurched ahead in a stop-and-go style: first a whistle (no foul called), and then another (resulting in offsetting penalties). As Arellano prepared to take the penalty shot, Enigma looked like a shoo-in. But no – Arellano hit an air-ball that went wide, as did MacDonough’s subsequent shot out of the bowl-in. Tommy Collingwood fought through Enigma’s defenders, but his goal attempt also went wide. Hall stepped in to end the conversation with a huge pass downfield to MacDonough, who popped the ball in for a 14-13 win.

All in all, the outcome an enigma – even to Enigma.

“I don’t know what happened, man!” said Hall. “We had a blinding fifth chukker. You don’t feel it, then all of a sudden boom-boom-boom! The next thing you know, you’re tied; then you’re down by one, down by two. They scored six goals! We started up by three; we ended down by three. Then we go into the sixth chukker, and we end up even. It was just a crazy, crazy game. It doesn’t happen like that very often.”

MacDonough offered his take on it. “To be honest, they were a really strong team, but the first half we didn’t feel that pressured. The fourth chukker was all right, and then in the fifth they hammered us. We were up by three, and all of a sudden we were down by three, so that was a fight,” he said.

“I think we had a pretty solid team, a ‘four-man’ team,” he continued. “Everyone was trying to do his own job. But today we had to bring something else to the game. It wasn’t enough being solid. I give (Palm Beach Illustrated) a lot of praise. To be honest, they played a heck of a game. It was tough.”

MacDonough and Hall were recognized for their contributions to the game, Hall as MVP and MacDonough for having the best-playing pony. Hall scored six goals total and played in amazing tandem throughout the entire game with MacDonough, the pair making more shared plays than you could count. Suavidad (the BPP), a product of MacDonough’s renowned polo pony breeding program in Argentina, was his fast train in the fourth chukker and in overtime.

Audi triumphed over FlexJet 12 to 8 in the strategically important third round Ylvisaker Cup game for both teams.

Audi’s Nic Roldan stated emphatically, “It was do or die time for us!” That sense of urgency powered Audi to a convincing win over their fellow Ganzi team FlexJet.

The game started out a bit choppy as both teams probed each other for weakness. FlexJet had Gonzalito Pieres in the lineup replacing Rodrigo Andrade, but the change did not seem to disturb the rhythm of the team in white as they were equal with Audi at 2-all on the scoreboard at the end of the first chukker.

Roldan and team Audi found their stride in the second and third chukkers, capping a four-goal run with a sneak attack penalty six conversion to end the third chukker countered only by a penalty two conversion from Pieres. This gave the offensive advantage to Audi with a 6-3 lead heading into halftime.

The teams mirrored each other through the fourth chukker as each scored two goals. At the start of the fifth, Marc Ganzi drove in a field goal to initiate a four-goal run by the powerful Audi offense. Roldan and Ganzi both scored twice in the fifth chukker to give Audi an insurmountable seven-goal lead heading into the sixth chukker. FlexJet tried to rally in the sixth chukker and closed within four goals, but the Audi lead held up easily.

“We concentrated on going to the man and keeping it simple,” said Roldan who scored nine of the 12 goals. “Marc was super up front, Lucas was working his tail off in the middle, Freddie was solid at back, and I was just trying to help out.”

Ganzi, whose three goals jump started the Audi offense, paid tribute to the opposition and the fields. “We beat a good team today,” said Ganzi. “They basically have two 10-goal players with Gonzalito and Miguel. We planned to stop Cody (Ellis) since he scored five goals the other day, and it worked. The fields were amazing, the ball was rolling, and it really opened up the game.”

Audi has a bye in the next round of bracket games, but is in good position with a 2-1 record, and 1-2 FlexJet faces undefeated Orchard Hill in their final bracket game.

The first chukker kicked off with a penalty one in favor of CT Energia, which gave them an automatic goal and a one-point lead starting out. A penalty shot by Joao Paulo Ganon was deflected and another penalty one was awarded to Orchard Hill, tying the score up 1-1. Lucas Criado took off on a breakaway from a bowl-in to score the first goal of the match, making the score 2-1 and ending the first chukker.

After a wide goal attempt by Facundo Pieres, Ganon converted a penalty four to even the score up once again. In classic polo play, Criado shot the ball with pinpoint accuracy to teammate Remy Muller. Muller drove it in, to score for Orchard Hill. Pieres made a penalty conversion and Orchard Hill began to pull away from CT Energia with a two-goal lead. Criado continued the momentum with another shot through the uprights. Alessandro Bazzoni fired back with a goal for CT Energia, keeping the play lively at 5-3. But the Orchard Hill team widened the gap again when Pieres converted another penalty to end the second chukker 6-3.

Criado kicked off the third chukker with a run to goal but it went wide. However, after the knock-in, Muller worked in on CT Energia’s play and made a backshot to Criado, already on the move, who took the ball in to score. Kris Kampsen made a spirited goal attempt, breaking his mallet in the process and although the mallet head flew through the goal posts, the ball went wide resulting in an Orchard Hill knock-in. CT Energia made up some steam with a run by Ganon up field to the goal mouth and Bazzoni backed him up, scoring and narrowing the gap 7-4.

In the fourth chukker, Pieres and Criado continued their stellar teamwork, working like a well-oiled machine. Pieres drove Criado a long lofted pass to easily score. Criado’s ball shot on a trajectory that squeaked by one of the flaggers. At the end of the play, in a demonstration of sportsmanship, Criado apologized to the flagger for coming so close. Ganon sent Manifold a pass down field. Manifold drove the ball in to score, ending the fourth chukker at 8-5.

The fifth chukker teemed with goal attempts, but it was Pieres who broke the wide streak, making a run down field to score. During a timeout, announcer Gus Whitelaw thought on his feet, playing Dolly Parton’s “9 to 5” to punctuate the score. After play resumed, Kampsen converted a penalty two to make the score 9-6. Pieres took off on a breakaway, scored and Orchard Hill broke into the double digits going into the sixth chukker.
Then, Pieres continued his hot streak, winning the ball off of a bowl-in and scoring, making it 11-6. CT Energia battled back, with Manifold scoring. Pieres and Criado were in the zone working together as a unified force. In another beautiful play Pieres sent a pass to Criado to score. Kampsen scored the final goal of the match in the final seconds, ending the match 12-8.

“They change their positions so much, it’s hard for us to follow them around,” said Van Andel. “It was a man-on-man game, and the better we did that, I think the better we scored. I’m happy we came out on top.”

“They played really well, especially in the first half, and we did better in the second half,” said Criado. “It was tough to control the game. That was the key. They have Joao Paulo Ganon, who is very good, and Alessandro [Bazzoni] scored a couple of goals.”

The action will continue on Tuesday at noon with Villa Del Lago going head to head with Tonkawa at the International Polo Club Palm Beach.