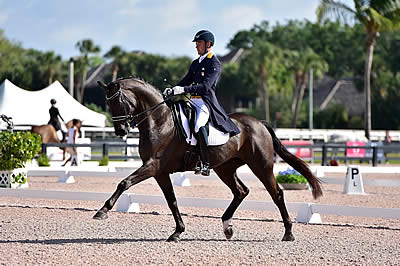 Wellington, FL (March 8, 2017) – Endel Ots and Lucky Strike enjoyed their 2018 debut at the Global Dressage Festival and proved that Ots’ slow and steady approach to the young star’s training is a formula for success.  Ots and the Hanoverian gelding Lucky Strike (Lord Laurie x His Highness) that ignited FEI World Breeding Dressage Championships arenas not once but twice as one of the few American horses ever to represent US Dressage there, posted a victorious 73.235% ride in the USEF Developing Prix St Georges and were third (68.088%) in the FEI Prix St George, launching a confident return to the show ring during week eight and the Palm Beach Dressage Derby at the Adequan Global Dressage Festival in Wellington, Florida.

“I had to brush the cobwebs off a little,” joked a modest Ots, who has been on a competitive hiatus while focusing on developing a string of bright stars for Everglades Dressage LLC of Wellington. “This was his first test since the Developing Young Horse Championships and we won. It was a nice, clean test and he went very nicely in front of me. I was especially happy with his solid canter pirouettes. He’s come back stronger between the last championships and now.” Lucky Strike, owned by Endel and his father, neurosurgeon Dr. Max Ots, was the 2016 USEF 6-Year-Old Division Champion.

Ots hasn’t been in a hurry and the results speak for themselves: “A young horse is going to take as long as they take. I want to create a happy relationship, where they will be with me in the tests and let them have time to develop, enjoy the show ring and make US teams.

“As Lucky Strike develops, my sponsor, Custom Saddlery has been so helpful in fitting his saddle,” Ots added. “It sounds like a little thing, but comfort is so important to horses when we are asking them to give us more.  Lucky and I are, well, ‘lucky’ to have such a great support team.  I was also happy that the Custom team from Holland was on hand to see how nicely Lucky is progressing this weekend.”

Ots is a USDF Bronze, Silver and Gold medalist and 2011 Pan American Games US Team Alternate who has finished multiple horses to Grand Prix level. In 2017, he won the Reserve Champion title in the Developing Horse Prix St George at the Markel/USEF Young & Developing Horse National Championships, and coached both Chase Hickok (who campaigns Sagacious HF for Hyperion Farm) to become the top-scoring American rider on the FEI Nations Cup teams for Fasterbo, Sweden and Hickstead, England, and Bebe Davis and Fiderhit OLD, winners of the Individual Gold medal at the Adequan/FEI North American Junior & Young Rider Dressage Championships.

“His notable track record is proof of his dressage expertise,” Young Rider Lauren Gorton has said about Ots, who has been industriously furthering his own skills with Robert Dover, Albrecht Hinneman, Debbie McDonald and Christine Traurig.