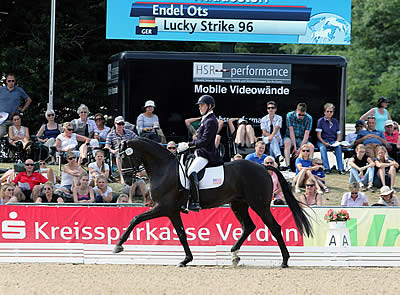 Wayne, Illinois (August 22, 2016) – As the top ranked combination in the Six-Year-Olds division, Endel Ots and Lucky Strike look to further their resume of high marks at the upcoming Markel/United States Equestrian Federation (USEF) Young and Developing Dressage Horse National Championships. The pair’s impressive national and international performances have set them apart as the top challengers with an overall average of 8.640 heading into the hotly contested competition to be held at the Lamplight Equestrian Center in Wayne, Illinois, on August 24-28.

Ots and his talented Hanoverian gelding Lucky Strike (Lord Laurie x His Highness) most recently represented the U.S. at the FEI World Breeding Championships for Young Dressage Horses in Ermelo, The Netherlands. The pair earned international recognition with Lucky Strike being one of a rare handful of U.S. horses to have ever competed at the FEI World Breeding Dressage Championships two consecutive years. Ots reflected on this year’s World Breeding Championships, saying, “Being exposed to the best young horses in the world inspires and motivates me to keep striving to the next level with Lucky Strike. I am very proud of my horse and I think his solid composure helps to prepare him for future international competition.”

Ots and Lucky Strike topped the qualification list by earning the gelding’s highest score to date: a 8.760 in the FEI 6-Year-Olds Final at the Global Dressage Festival CDIO 3* by Stillpoint Farm. Lucky Strike has been in the more than capable hands of Ots’ training. Ots has an impressive track record at this competition; in 2012 he won the USEF Developing Horse Grand Prix Reserve Championship and came back in 2014 to win the Developing Grand Prix Horse National Championship with Everglades Dressage’s Donatus.

With the pair now aiming to take on home-turf contenders at the Young Horse National Championships, Ots feels that his and Lucky Strike’s strength stems from their close partnership. “We know each other so well, as I have ridden and trained Lucky since he was 3 years old. He has my back when I am not at my best, and I know the kind of warm-up and training routine to bring out his best,” Ots states.

Ots has also sought out the expertise of a myriad of top-level mentors to fine tune Lucky Strike’s training. Ots credits Canadian Grand Prix rider Evi Strasser for her continued efforts and mentoring from the very beginning of Lucky Strike’s training. He has also had excellent guidance from U.S. Dressage Young Horse Coach Christine Traurig and the Developing Dressage Coach Debbie McDonald throughout the winter season. Ots and Lucky Strike also had the opportunity to ride with Canada’s Team trainer and German National Coach, Johann Hinnemann, in the Adequan USDF FEI Level Trainers Conference.

Not only is the gelding physically ready for the Young Horse National championships, but Ots also feels his mental training and focus is right on cue. “Lucky has matured so much in his mind. He can handle various delicate aids, and his concentration on me in the show ring is paramount,” he said.

The event will also be a retreat home for Ots, who worked in the Chicago area for 8 years before accepting a training opportunity with Hubertus Schmidt in Germany. “I grew up as a child showing at the Lamplight Equestrian Center,” Ots commented, “It will be a nice homecoming for me.”

Ots operates his training business Endel Ots Dressage out of the Bethany Peslar’s Everglades Dressage facility in Wellington, Florida. For more information on the numerous accomplishments and latest news for Ots and Lucky Strike, visit www.endelotsdressage.com.