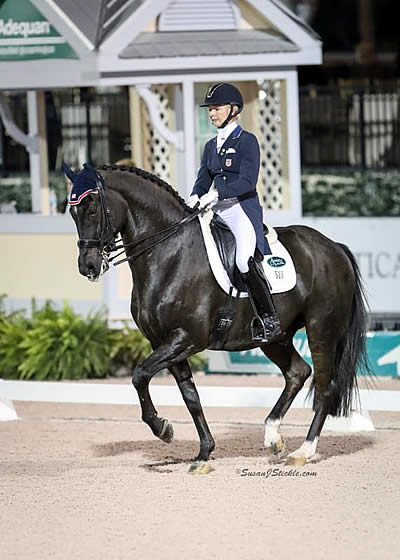 Bateson and Alcazar, a 2005 KWPN gelding (Cantango x Polina) owned by Jane Forbes Clark, climbed to the top of the leaderboard in the FEI Grand Prix Freestyle CDI 4*, presented by Havensafe Farm, earning a score of 73.325%.

Alcazar underwent serious colic surgery less than a year ago and has overcome many challenges to work back into the competition ring.

Bateson continued, “He had colic surgery during the show in Aachen, and it was quite serious. He had a lot of gut removed. We had incredible surgeons, and we were blessed to be in the right place. I was unlucky to have it happen, but lucky to be where we were. To be honest, he had the surgery and then he never looked back. He was off for three months and then came back, almost better than ever. Just to have him alive, because they didn’t give him much of a chance, (and) for him to be back not long after and winning a CDI 4*, is pretty amazing.”

Of her freestyle ride to Bruno Mars’ “Uptown Funk,” Bateson commented, “It’s the same basic music that I had last year, but I knew that I had to increase my degree of difficulty. Marlene Whitaker did this one for me and put her heart and soul into this freestyle. I was determined to have ‘Uptown Funk’ as my song, as soon as I heard it on the radio. I like to pick my own music, so I went through picking it out and then Marlene worked her magic. I just wanted something fun, because he’s that kind of horse. I thought it really fit him.”

“We got through the test without any big bobbles,” said Francis, “but we still have little things where he gets a little nervous. This summer he got really afraid of the audience in Rotterdam when we went, so now he’s still really afraid of them. Otherwise, he was a little easier to ride than the last show. At least we made our canter pirouettes on the correct lead this time! He’s a good boy, and he’s really fun. He tries super hard; sometimes a little too hard. He’s a really cool horse.”

Matute rode Quantico to the FEI Grand Prix CDI 4* victory on Thursday. Of his freestyle ride, Matute said, “This is only his second season doing Grand Prix, so I have to keep that in mind when we decide which shows he competes in. The goal is to keep gaining experience in the Grand Prix. He felt really good today, very calm. I was actually worried that with the crowd and the lights and the noises, he was going to be overwhelmed, but today we’ve learned that he can take the pressure pretty well.”

Judge at C, Janet Foy (USA), noted, “I think to have these three top riders tonight is really thrilling for all of us. Their freestyles were very difficult, the choreography was really wonderful, and I know that they were all a little disappointed after the Grand Prix because they all made some little mistakes. Tonight, you could really see the determination on their faces. As judges, I think that looking at the results, we all loved the top three and we all found some wonderful highlights.”

Betsy Juliano, of AGDF 10 sponsor Havensafe Farm, said, “It’s a real thrill to be participating in this, particularly tonight because I’ve watched these riders for a long time and I think that the privilege of being in Wellington in the winter is that you get to see horses and riders grow and improve over a long period of time. It’s a privilege and honor to watch the elevation of the sport year after year, and this facility and atmosphere really promotes that.”

The win was the second of the week for the pair, after a victory in Thursday’s FEI Grand Prix CDI 3*, presented by The Dutta Corp.

“It was kind of fun,” said Francis. “The music was a little new, so he was excited. I was really happy with him. He worked really hard to do everything I asked of him. At one point, I looked up at the big screen and I was like, ‘Oh, I’ve got to go more sideways!’ and then, ‘What are you doing, pay attention to what you’re doing!’ It was a funny moment for me. Overall I was very happy with him; he’s trying to be more honest in the ring and is doing better and better. He’s a talented horse, and I’m just now trying to ask a little more of him because there’s a lot more in there.”