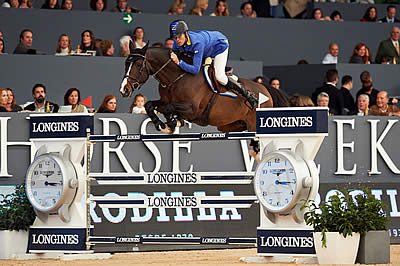 Madrid (ESP), 29 November 2015 – Just seven days after coming out on top on home turf in Stuttgart, Germany’s Christian Ahlmann made it a back-to-back double with victory in the sixth leg of the Longines FEI World Cup™ Jumping 2015/2016 Western European League in Madrid, Spain this afternoon. Last weekend he partnered Codex One, but this time around it was his old friend, the 15-year-old stallion Taloubet Z, who carried him to success, and the 40-year-old rider couldn’t help but feel emotional in the aftermath.

“My horses are going so well at the moment; it’s amazing – we’ve had some very, very hard days not so long ago, but now we are having some very nice days, and Taloubet was jumping fantastic this afternoon. He’s always a very good horse, but today felt special because I was thinking and hoping that Mr Melchior was looking down and watching him win, and that he would be feeling proud once again!” he said. He was of course referring to the late master of the world-famous Zangersheide Stud and the father of his partner Judy-Ann, Leon Melchior who passed away just a few short weeks ago.

Only five horse-and-rider combinations made it through to the jump-off against the clock today, and runners-up were the pair who won the Madrid leg of the series 12 months ago, Colombia’s Carlos Lopez and Prince de la Mare. Belgium’s Pieter Devos lined up third with Dream of India Greenfield while Sweden’s Henrik von Eckermann finished fourth with Cantinero ahead of Germany’s Marco Kutscher and Chaccorina in fifth spot.

It was a tough afternoon’s jumping, with 24 of the 40 starters picking up a tantalising four faults in the first round. But when she produced the quickest of these, in a time of 56.03 seconds, Britain’s Laura Renwick slotted into sixth spot with Bintang ll.

The 12-fence track designed by Spain’s Javier Trenor presented a fascinating challenge, with mistakes made from the very first to the very last. The double of oxer to vertical at fence five was followed by a 360-degree left-hand turn to the following vertical at six, and then it was on to a big oxer at fence seven and a tall vertical with a water-tray at the back of it at fence eight which proved a bit spooky for some. There were consistent errors at all of these obstacles even before riders faced into the triple combination at fence nine, while the last two fences – an oxer followed by the final Longines planks – were further complicated by the fact that they needed to be ridden on a short five-stride distance.

As Ahlmann explained afterwards, “Today was a proper Grand Prix. There were nice classes until today in Madrid, not always easy but with plenty of clear rounds. But when we walked the course this afternoon we could see it was going to be different. It was big and technical, but it was not unfair so there were no bad pictures even though only five of us managed to qualify for the jump-off.”

Last year’s victor, Lopez, was first to go against the clock and with the long, loping stride of Prince de la Mare he set the target with a great clear in 41.37 seconds. Belgium’s Devos followed with a mistake at the second of the two remaining elements of the triple combination while Sweden’s Henrik von Eckermann and Cantinero ran out of luck even earlier when hitting the opening oxer for a slower four faults.

And that annoying first fence also fell for Germany’s Marco Kutscher who then decided not to put too much pressure on his lovely nine-year-old mare Chaccorina, posting a slow time of 45.32 seconds but once again making it all look very elementary indeed. So the door was wide open as Ahlmann entered the ring. Despite all his experience, the German rider knew he still had a job to do.

“I was in a good position as the last to go – the pressure was there, but not more than usual,” he said afterwards. “The time to beat was quick but I knew from the first fence that it was going to be good. I just rode from fence to fence and the feeling got better and better, but it was still quite close in the end,” he pointed out, after registering the winning clear round in 40.98 seconds.

Ahlmann talked about his winning ride, the stallion Taloubet Z with whom he has recorded many of his greatest successes including victory at the FEI World Cup™ Jumping Final in Leipzig (GER) four years ago, and more recently team silver at the FEI European Championships 2015 in Aachen. Together they claimed runner-up spot at the third leg of the Longines Western European League in Lyon (FRA) earlier this month.

“Taloubet has been owned by the Melchior family since he was six years old, so he has been with Zangersheide for seven or eight years now. It was Judy (Judy-Ann Melchior) who rode him originally and she brought him up, and then I got to ride him when he was nine. He has been very successful; he has done so much for me in my sporting career and he has done a lot for the sport and for breeding also. He is just a great horse!” he said.

Today’s result has rocketed Ahlmann up to the top of the Western European League table with a massive 57 points and a firm qualifying place for the Longines FEI World Cup™ Final 2016 in Gothenburg, Sweden next March. French riders Simon Delestre and Penelope Leprevost now lie second and third while Henrik von Eckermann is in fourth going into the seventh leg of the series which will take place at the hugely popular Christmas show at Olympia in London (GBR) on 20 December.

The next leg of the series will take place at Olympia, London (GBR) on 20 December 2015. For details of the British fixture, visit www.olympiahorseshow.com or contact Press Officer Jo Peck, JoPeck@hpower.co.uk, +44 1753 847 900.

During today’s competition, a special presentation was made by the Organising Committee to Spain’s Pepe Alvarez de Bohorques who was Chairman of the FEI Jumping Committee for eight years and silver medallist at the FEI World Jumping Championships in Buenos Aires (ARG) in 1966.

1 horse-and-rider combination eliminated – Spain’s Manuel Fernandez Saro and Enriques of the Lowlands, for a rider fall at the penultimate fence on the 12-obstacle course.

Only 5 horse-and-rider combinations qualified for the second-round jump-off against the clock.

The winners were Germany’s Christian Ahlmann and the 15-year-old stallion Taloubet who together claimed the FEI World Cup™ Jumping title at the Final in Leipzig, Germany in 2011.

This was Ahlmann’s second Western European League victory in a week. He also came out on top last Sunday in Stuttgart (GER) with Codex One.

Just five more qualifying rounds remain in the Western European League and the next takes place at Olympia in London (GBR) on 20 December.