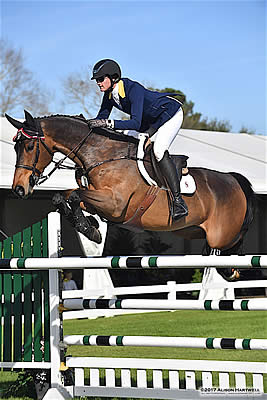 Jumper action was in full swing at the Gulf Coast Winter Classics and Sunday’s beautiful weather was the perfect backdrop to the $25,000 Nutrena Grand Prix which closed out Week II.

Shannon Hicks of Lake St. Louis, Missouri rode away with a first Grand Prix win for Helen Gilbert’s Emir D and also picked up third and fourth placings with Helen Gilbert’s C’Havinia and Al Pacini. “Emir has been second and third a bunch of times, but this was our first win together!” said Hicks.

World renowned course designer Michel Vaillancourt designed the course.  “It was tough,” commented Hicks. “Week I was soft. This week was more of a test than last week. The lines were a little tricky and the jumps were wider. It wasn’t easy, but it was better for my horses because they jump the higher jumps better,” she said.

Vaillancourt set the first round time allowed at 83 seconds. “Al Pacini was my first ride in the class. We left a stride out on our way to the Horseflight jump. We then rolled back to the liverpool and we got a little dull when we were organizing for that and had a rail,” she commented.  The pair finished their first round with four faults in a time of 76.858 which would find them finish in fourth place overall.

Penny Brennan of Buhl, Alabama and Mister Money, owned by Brennan and Michelle Guardino-Dettelbach, followed Hicks. Brennan won last week’s $8,000 Horseflight Welcome with her own Sun Tzu and after posting a clear first round in a time of 81.906, sat in the lead position.

“Emir was my second ride and has a shorter stride. I added to the Horseflight with him and he went clean,” she commented. The pair qualified for the jump off round after earning a first round time of 76.946 to the delight of the crowd.

Helen Gilbert’s C’Havinia was her last ride in the class. “With C’Havinia, I left a stride out to the Horseflight jump and got there a little earlier than I planned and she had the back rail,” said Hicks. The pair finished in third place with four faults in a first round time of 73.989 seconds.

No other horse and rider teams advanced to the jump off round. “Penny is notoriously fast and I thought that if she goes in there and lays it down then I’m out,” commented Hicks. “When I saw her drop some rails I realized I could take it easy with Emir and just cruise around and if anything, I just got a little too conservative,” she said. Brennan and Mr. Money suffered three rails with twelve jump faults in a time of 47.369 seconds and left the door open for Hicks and Emir D. They finished the jump off round with four faults in a time of 43.984 seconds, securing the win and leaving Brennan and Mr. Money in second place.

“This week Matt [Cyphert] and Holly [Shepherd] got here and Penny and I were joking like we were here first, but now they’re going to kick our butts,” she laughed. “So we were both definitely pleased with how we did,” she added.

“I’ve had Emir the longest. I got him from Andy Kocher last November and he is my old reliable. He is 13 and has a lot of mileage, and he’ll jump clean every week if I don’t screw up,” she laughed. “He’s not super-fast at the jump offs, but he jumps very high and lofty,” she added.

“Helen Gilbert owns all of these horses and she is the greatest owner ever. She’s super supportive on all fronts and lets me do what I want,” said Hicks. “Without her, I wouldn’t be here,” she added.

“Even though Helen [Gilbert] wasn’t here ringside, she had an especially great week! Holly [Shepherd] won the Derby with her horse White Lightening and then Emir won the Grand Prix and C’Havinia and Al Pacini were also in the ribbons,” she said.

“I’ve been coming to the Gulf shows on and off since it started but we have been here consistently the last five or six years for sure,” said Hicks. “I come here because I love Bob’s shows. He gives away great money and the Grand Prix field is awesome. There are so few places in the country you can jump on that beautiful grass field week in and week out. The weather is here is awesome and the area is great!” she added. “We’ll definitely be here all six weeks,” she added.

The Arenus Jr./Amateur Owner Jumper Classic took place on Sunday and awarded Rico 5, ridden by Sara Dees, the win, besting a field of fourteen horse and rider teams. Heather Zuber of Zionsville, Indiana and her own Phoenix took second place and Amanda Scule rode Seale Horses, LLC’s VDL Endorado Ryal K to a third place finish. Zuber returned to the winner’s circle for a fourth place ribbon, this time in the irons of her own Firebird. Ramble On Farm’s Shaq, ridden by Kaitlyn Williams, placed fifth and Shanna Beyer and her own Invictus earned a sixth place ribbon.