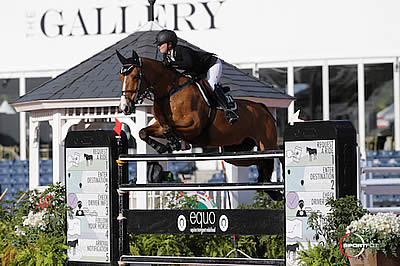 Minikus and Zephyr Are Unbeatable in Suncast® 1.50m; Jane Gaston and Because Top Hunt Ltd. Amateur-Owner Hunter Over 35

Moffitt (18) switched from representing the U.S. to riding for Great Britain this year and stood for the playing of the British national anthem in her honor for the first time on Sunday. Moffitt has a farm in Wellington, but is based in England most of the year and began training with Olympic team gold medalist Ben Maher (GBR) at the end of last year’s WEF circuit.

For her win on Sunday, Moffitt was aboard For Sale 6, an 11-year-old Westphalian mare (For Pleasure x Cassini I) that was purchased from Germany’s Ludger Beerbaum.

“She is definitely not for sale. I’ll be keeping her for quite some time,” Moffitt made clear after her victory. “I have had Sale for about a year and a half. My previous trainer (Laura Kraut) rode her for the first few months that we had her, and then she actually got injured after the Junior Nations’ Cup here at WEF last year. This is her first big class back, so we are very excited with how she jumped. It took her a little bit to get back into things. We were a little worried, but I think it is safe to say she is back.”

Moffitt previously won her first CSI 2* grand prix in Knokke, Belgium and stepped up in the summer of 2016 to compete in some of the CSI 5* Global Champions League events. The rider decided to skip college and pursue her riding career full-time, but has remained an amateur as she transitions to the bigger classes. With the new addition of the CSI 2* events to complement the five-star competition at this year’s WEF, Moffitt had the perfect opportunity to jump some different horses and gain valuable experience.

“I have a few five-star horses right now, and I was a little frustrated that I could not jump those classes this week, but it was nice that I was able to use my 1.45-1.50m horses,” Moffitt noted. “I get excited to be able to use them and have a goal for them. I think that’s really nice to have the two-star going along with the five-star.”

Another top young rider in the class on Sunday, Lucas Porter (19) splits his year between the U.S. and Holland, coached by reigning World Champion Jeroen Dubbeldam (NED). For his second place finish, Porter was aboard B Once Z, a 13-year-old Zangersheide mare (Baloubet du Rouet x Lavaletto) that he found from Katharina Offel (UKR) at the start of 2015.

“She is definitely the best horse that I have ever ridden,” Porter proclaimed. “She has such a big heart; she is so quick against the clock, and she is such a trier. I have never sat on a horse that has this much faith in herself. She is just the perfect horse for a young rider like me.”

In the jump-off, Porter explained that he lost his stirrup, which cost him the small fraction of time that divided first and second place. The rider was also happy to have the opportunity to jump in the 2* division, however, and was happy with his result.

“The two-star and five-star combination has worked out perfectly,” stated Porter. “It keeps the number of riders and horses in the classes exactly where they should be. It also creates more opportunity to make the two-star grand prix and the five-star grand prix each go at an exciting time where the majority of the show can come watch. Even though I’m not doing the biggest competition at the show, I still have a primetime showing. It makes it a pleasure for everyone involved.”

At 29 years old, third place finisher Andrew Welles felt like the senior to his counterparts in the top three on Sunday, but he was happy for the opportunity to use his veteran mount Boo van het Kastanjehof in the CSI 2* competition. Welles has ridden the 16-year-old Belgian Warmblood mare (Thunder van de Zuuthoeve x Pachat II) for the past seven years after purchasing her from his best friend, Hardin Towell.

“She is the most special horse I have ever had,” Welles stated. “She is owned by my father, who has been the biggest supporter of my career. At 16 years old, she feels like she did when she was nine. She is having an absolute ball. I’m really just enjoying each class with her right now. It has been a lot of fun to have her back going in the big ring this year. She has done three grand prix classes, and she has been double clear in all three, so we will take it.”

Adding his experience of the first concurrent two-star and five-star events at WEF, Welles added, “I think it is phenomenal. I give huge credit to the organizing committee for putting this on. I think it gave a great opportunity for younger riders and younger horses, or older horses like mine, to have a division that really suits them. It also gave a lot of the five-star riders the opportunity to take a little pressure off of their horses to not have to qualify out of 100 horses in the grand prix qualifier. Granted, the better riders always tend to rise to the top, but there is still something to be said for that.”

Minikus and Zephyr Are Unbeatable in Suncast® 1.50m

The USA’s Todd Minikus continued his winning streak aboard Wyndmont’s Zephyr at the 2017 WEF, securing the pair’s second win of week five, and their fourth consecutive win of the WEF circuit, in Sunday’s $86,000 Suncast® 1.50m Championship Jumper Classic.

Fifty-one entries contested the first round course set by Robert Ellis, with ten advancing to the jump-off and seven double clear rounds. Minikus and Zephyr smoothly navigated the short course in the winning time of 35.98 seconds. Conor Swail (IRL) and Finca Horses’ Flower finished second in 36.38 seconds. Tiffany Foster (CAN) and Artisan Farms’ Brighton placed third in 36.61 seconds, and Eric Lamaze (CAN) and the Chacco Kid Group’s Chacco Kid rounded out the top four in 37.06 seconds.

“It was kind of a fast rider ‘Who’s Who’ in the jump-off with riders like Kent, Conor, and Eric,” Minikus continued. “I thought it was going to be fast, and it ended being blistering, really. That was a very fast round. It seemed like everything came up nice for me, and I was able to just keep going and going, so I am pretty happy with it.”

With each win, Minikus is gaining confidence in Zephyr’s ability and getting to know the 13-year-old Dutch Warmblood gelding (Landor S x Calvados) better. Owner Ronnie Beard purchased Zephyr from Great Britain’s Peter Charles five years ago after the gelding was named best seven-year-old in Spain that year and has also enjoyed watching the partnership excel. Dorman brought along the horse, but he had almost a year off.

“With that rest, he has just come back into his old self again,” Beard said.

Minikus also rides Wyndmont’s Valinski S. Beard compared, “They are both careful horses, and I think Todd challenges them enough with the pace. I think that after slowly bringing them along, they are ready for it, and I think Todd is the person to do it with them.”

As for Minikus, who only rides the Wyndmont horses at the show and leaves their training to Beard and Dorman at home, piloting different horses is nothing new.

“I have ridden so many horses in my life that there is not much that I have not seen or felt at this point,” said the veteran competitor. “It does not take long for me to adapt to different horses really. I like that challenge of getting on new horses. When you are as old as I am, you don’t need much practice!”

Jane Gaston and Because Top Hunt Ltd. Amateur-Owner Hunter Over 35

Jane Gaston of The Plains, VA and her own Because continued their championship streak in the Hunt Ltd. Amateur-Owner Hunter Over 35 division during week five. The pair won all four over fences classes with scores of 88, 87, 88, and 88, and placed fifth in the under saddle class. Gaston and Because have been champions of the division for three weeks in a row, also winning the title during weeks three and four.

“He’s been fabulous every week,” Gaston explained. “He comes out and tries hard every day. We’ve had him a year now, and he just settled right in to being a hunter. He did the First Years last year and is an awesome horse.”

Because is a 2007 KWPN stallion by Verdi that Gaston purchased through Daniel Geitner. Both Gaston and trainer Kelley Farmer have had tremendous success on the horse since taking over the ride, earning many coveted tri-color ribbons during the 2016 fall indoor finals circuit.

“He’s just really great to be around,” Gaston continued. “He makes a solid effort no matter where you put him or how you’re getting there. I appreciate that in a horse.”

Becky Gochman of Palm Beach, FL and Catch Me, owned by Gochman Sport Horses LLC, captured the reserve title. The pair placed second and third over fences and second in the under saddle. Gochman has been a strong contender in the Hunt Ltd. Amateur-Owner Hunters Over 35 throughout WEF. She and Catch Me were named champions of the division during week two, and earned the reserve honors during weeks one and three.

Catch Me, a coming ten-year-old Holsteiner gelding by Casiro, is also highly decorated. The grey gelding with a striking jumping style was named 2016 USEF Horse of the Year Awards after an extremely successful year with Scott Stewart in the Second Year Green Working Hunters.