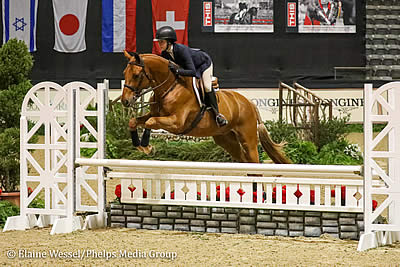 Lexington, Ky. – Oct. 26, 2019 – Back for the second day of competition during Opening Weekend, the 2019 National Horse Show honored its first set of champions Saturday, highlighted by Elizabeth Chenelle’s impressive victory in the second annual Taylor Harris Insurance Services National Horse Show 3’ Adult Equitation Championship ahead of a field of 41 other entries. A unique contest, the class allowed adult riders to showcase their equitation talents, a skill that is often celebrated only for junior equestrians. Held in the Alltech Arena, the final was open to riders over the age of 18 who have qualified by gaining points throughout the year. The popular class offered exhibitors a chance to compete in a national final amidst an atmosphere filled with history and tradition, for which the National Horse Show is synonymous.

A three-phase contest, the class first challenged the original start list of 42 horse-and-rider partnerships over course designer Bobby Murphy’s 11-effort pattern, which offered exhibitors opportunities to display their abilities via a series of lines and long approaches. Following the first round of riding, 15 contenders earned callbacks to qualify for the final two phases of competition, which consisted of a flat class in addition to another trip over fences. Whittled down to the best performers, the latter half of the class included Chenelle, Kayla Jacobs, Jaime L. Krupnick, Anna Rossi, Andrea Robbins, Madison Myro, Anna Koenig, Tyler Petrie, Claudia Millstone, Sabrina Hall, Jennifer Morton, Jeanine Cash, Olivia Jacob, Kiera Phlipot, and Allison Pelzel. Following the under saddle showing, riders Myro, Cash, Phlipot, and Morton impressed the judges with their excellent form and were moved up the standings to inch closer to the lead headed into the final phase.

Returning in reverse order of the standings, challengers showcased their abilities one final time over Murphy’s second track, each hoping to either leapfrog up the rankings or retain their top positions. As the class progressed, combinations turned in a series of exemplary performances in an effort to catch the early front runner, Chenelle, after her standout rides over fences and on the flat aboard A. Brooke Farr’s Dimacho, the chestnut gelding who was coincidentally the reigning champion after winning the inaugural chapter of the class in 2018 with Hannah Brown in the irons. Ultimately, Chenelle could not be caught as she consistently demonstrated textbook equitation over three rounds of riding on Dimacho, solidifying her victory as the 2019 Taylor Harris Insurance Services National Horse Show 3’ Adult Equitation champion thanks to her final performance that earned top marks from the judges’ panel.

Moving up the ranks from fourth place after the first phase into the reserve position was Rossi, who piloted her own Cakebread, and third place was claimed by California-based Jaime Krupnick and her own Conux. True to the mission of the class, the three podium finishers represented a variety of backgrounds that include motherhood and diverse careers, a testament to the ideals of the class as a competition that allows adults to continue in their pursuit of equestrian excellence in the show ring after their junior days have concluded.

As the trainer of the winning rider, Armand Chenelle was honored for his role in the championship, and Kayla Jacobs and Rebecca Patterson’s Dia Caspar were awarded the distinction of the Best Turned Out Pair by the Grayson Jockey Club Foundation.

Earlier in the day, champions were crowned in their respective age group divisions, with nine athletes leaving the Alltech Arena with new tricolors in tow. In the two sections of the Cindi Perez and Anne Bennett Under 14 Equitation, presented by Palm Beach International Academy, Vanessa McCaughley and Eleanor Rudnicki rode to victory, while Ainsley Wade and Isabel Rudaz claimed the rosettes in the Cindi Perez and Anne Bennett 14-15 Equitation. The older junior riders in the Cindi Perez and Anne Bennett 16-17 Equitation performed strongly over two days of competition, and ultimately Caroline Kelly and Sloane McGuire outshone the pack to claim the championship honors ahead of their individual sections. Chenelle earned double victories Saturday with a division championship in Section A of the Adult Equitation and Madison Myro topped the leaderboard in the second section of the Adult Equitation, while Blythe Goguen was awarded the championship in the KHJA Equitation.