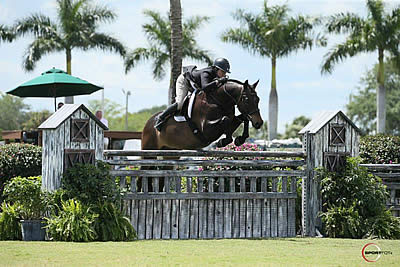 Wellington, FL — March 31, 2019 — On the final day of the 2019 Winter Equestrian Festival (WEF), Sunday, March 31, the top 25 hunter combinations returned to the Derby Field at Equestrian Village to contest for the winning honors in the $50,000 USHJA International Hunter Derby. Victoria Colvin led the all-female podium followed by Kelley Farmer in second and Liza Boyd in third as the trio once again demonstrated why they are household names in the hunter industry. The second round of the derby is the pinnacle event for hunter riders to close out the winter circuit and only invited the top-scoring competitors from round one of the event.

Ken Krome once again designed a beautiful track on the turf that included three high options and a rollback to a trot fence following fence two. The two panels of judges, consisting of Danny Robertshaw and Robert Crandall for panel one and Scott Williamson and Rob Bielefeld for panel two, had the ability to award extra points for handiness ranging from zero to 10.

Forty-five entries contested the final FEI-sanctioned class of the 12-week circuit, with 11 entries navigating the Guilherme Jorge-designed track without fault to advance to the jump-off.

When Chapot entered the ring as the eighth rider to return, the time to beat had been set at 38.05 seconds by Carly Anthony (USA) and Chacco. However, Chapot and Chandon Blue again showcased the speed and accuracy that have become their signature, tripping the timers in a clear 36.30 seconds to take over the top of the leaderboard.

USA’s Lillie Keenan capitalized on only three months of experience with her mount Fasther, owned by Chansonette Farm, LLC, to top the final class of the 2019 WEF in the $50,000 CaptiveOne Advisors National Grand Prix in the International Arena.

Guilherme Jorge built a track for 48 starters and welcomed six through to the jump-off. Keenan qualified two mounts and returned first and last over the short course. She set an early pace with a clear trip in 39.649 seconds riding Chaccolette for owner Chansonette Farm, LLC. She was sitting second when she re-entered the ring aboard Fasther and the gelding lived up to his namesake by stopping the clock at 36.688 seconds for the win.