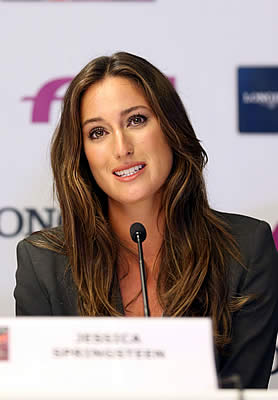 Miami (USA), 17 March 2015 – The brand new Longines FEI World Cup™ Jumping North American League was launched in Miami (USA) today by three of the biggest names in the sport – Beezie Madden, the most decorated US female equestrian athlete of all time and currently the only woman in the top 10 of the Longines world rider rankings, American Gold Cup winner and FEI Solidarity Ambassador Jessica Springsteen, and Hannah Selleck, team and individual gold medallist at young rider level and one of the sport’s up-and-coming stars.

The trio, who all started riding almost as soon as they could walk, are already gearing up for the new league, which kicks off in August 2015 across seven East and seven West Coast venues in three countries: the United States, Mexico and Canada.

Elegance is an attitude

“Longines’ motto is ‘elegance is an attitude.’ It’s true of their core business but it also rings true for equestrian sport,” Beezie Madden said. “Our sport is about elegance and the harmony we achieve with our horses is essential to success. Longines is the perfect partner for equestrian sport.”

“We are part of an exceptional sport because we get to rely on a very special partner: the horse,” Jessica Springsteen said. “Our horses are so much more than an animal. They are hard-working talented athletes with their own personalities. It’s an awesome sport and I’m so excited to share my passion for it with you today.”

“Horses are a great leveler,” Hannah Selleck said. “As riders we know that you can be winning one day, and on the ground the next. Riders can have very long careers which last for many years. Some of the more mature riders are old enough to be my father, but I quite like the one I’ve got!”

The 14 events* that will host legs of the Longines FEI World Cup Jumping™ North American League were selected after a rigorous screening process from a long list of 25 applicants. Impressively, 11 of the events featured in the recently published North American Riders Group Top 25 rankings.

The Longines FEI World Cup Jumping™ North American League will be showcased on a broad range of global platforms, from live TV broadcasts to streaming on digital outlets and mobile, focusing on the drama of equestrian sport with fascinating behind-the-scenes documentary-style coverage.

“The Longines FEI World Cup Jumping North American League is a massive boost to our sport and will dominate the headlines in 2015,” FEI 1st Vice-President and Chair of the FEI Jumping Committee John Madden (USA) said. “The new league is a huge opportunity for our athletes to shine on a North American stage and showcase top-level equestrian sport to fans across North America and the world.

“This league is also ideally suited to wide-ranging global brands that want to reach out to North American and international audiences, drawing very clear affinities with their own visions and values alongside Longines.”

Longines is now looking forward to supporting the further growth of Jumping across North America as the official Title Partner and Watch of the Longines FEI World Cup™ Jumping North American League. In addition, Longines will also provide a dedicated timekeeping team and data handling service for each of the 14 legs.

“We are proud to be partnering the Longines FEI World Cup™ Jumping North American League,” Juan-Carlos Capelli, Vice President of Longines and Head of International Marketing said. “This association is part of our long-term commitment with the FEI as we are its Top Partner, but also the Title Partner, Official Timekeeper and Watch of the Longines FEI World Cup Jumping Western European League, Chinese League and, as of today, the North American League.”

The Swiss watchmaker’s timing heritage in the United States goes back to the 1870s, and by 1886 the company’s popular chronograph engraved with a jockey and his mount was being used by most sport judges in New York.

Today’s launch was held at SPORTELAmerica, the annual sports media industry convention in the USA.

Athlete biographies (click on the links for more detailed information):

Elizabeth (Beezie) Madden is the most decorated US female equestrian athlete of all time and was the first female Jumping rider to earn over US $1 million in prize money. The three-time Olympian’s long list of accolades includes two Olympic team gold and an individual bronze medal, team and individual silver (2006) and team and individual bronze (2014) at the FEI World Equestrian Games™, and two team gold and an individual silver at the Pan-American Games. The four-time winner of the USEF Equestrian of the Year title and 2013 Rolex FEI World Cup™ champion, last year became the first woman to win the prestigious Longines King George V Gold Cup at Hickstead (GBR) shortly after returning six weeks on the sidelines with a broken collarbone.

Jessica Springsteen may have one of the most iconic surnames in the international rock music scene, but the accolades and titles she has earned in the show ring are all her own. Spurred on by her parents’ passion for horses, the Duke University graduate won multiple national titles in her junior and young rider career, and has continued to excel in the senior ranks of the sport. The FEI Solidarity Ambassador, who trains with Olympic gold medallists Laura Kraut (USA) and Nick Skelton (GBR), enjoyed a banner year in 2014. She was a member of the winning US team in the Furusiyya FEI Nations Cup™ in Dublin (IRE), won the American Gold Cup at the New York venue in North Salem, and was one of 10 riders to be long-listed for the Alltech FEI World Equestrian Games™ in Normandy (FRA) with Vindicat W. She was also declared leading rider at the Washington International Horse Show in October. This season she has already notched up eight top-10 finishes with her string of horses, headlined by Vindicat W, Lisona, and Davendy S.

Actor Tom Selleck’s daughter, Hannah has her sights set firmly on the Rio 2016 Olympic Games. She began riding at the age of four and achieved great success during her years as a Young Rider. She had a standout year in 2008, winning team and individual gold at the North American Young Riders Championship and the United States Equestrian Federation Talent Search Finals West. In 2013, Selleck was third in the Showpark Summer Festival Grand Prix with the mare Barla. In 2014, the pair cruised to a fifth-place finish in the Amalaya Investments Trophy class at the Longines Los Angeles Masters. Olympians Will Simpson, Leslie Burr Howard, and Ian Millar have all supplemented her training over the years.

A total of 14 athletes from the new North American league will qualify for next year’s prestigious Longines FEI World Cup™ Jumping Final, which will take place in Gothenburg (SWE) on 23-28 March 2016.

The top seven athletes from the East Coast US, top three from West Coast US, and the two best-placed athletes from Canada and Mexico, will qualify for next year’s Final, alongside winners of 15 leagues around the world.

Longines, the FEI’s Top Partner, Official Timekeeper and Official Watch of the FEI, has a long equestrian sports tradition: www.fei.org/hub/longines/longines-equestrian-sports.

The FEI, founded in 1921, is the world governing body for Jumping, Dressage & Para-Equestrian Dressage, Eventing, Driving & Para-Driving, Endurance, Vaulting and Reining. Recognised by the International Olympic Committee (IOC), the FEI celebrated 100 years of equestrian sport in the Olympic movement at the London 2012 Olympic Games. www.fei.org