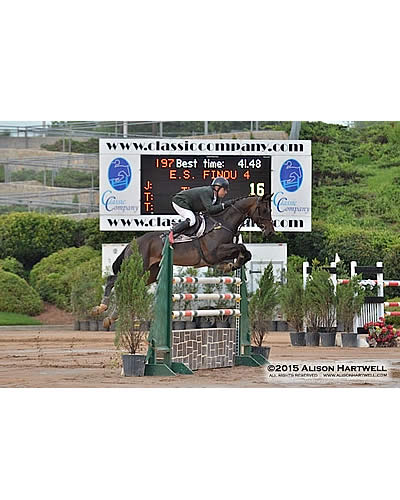 Equi-Sport, LLC’s E.S. Finou 4 and Vale fly over a jump in the Olympic Arena yesterday on their way to the winner’s circle.

Atlanta was jumping last night when the $35,000 Classic Company Grand Prix, presented by EMO, took to the Olympic Arena before a sold out VIP tent and a spectator lined arena.

All eyes were on Aaron Vale of Morriston, Florida for the evening’s $35,000 Classic Company Grand Prix, presented by EMO. Vale has been on a winning streak since arriving at the Atlanta Summer Classics last week and had already won the $15,000 Horseflight Open Welcome, the $2,500 USHJA National Hunter Derbies both Weeks I and II, as well as the $15,000 Nalley Toyota Stonecrest Welcome. The $35,000 Classic Company Grand Prix, presented by EMO had a field of 19 teams of horse and riders from around the country competing for the win on a challenging course designed by Stephens and the crowd was ready for a great competition.

After a series of four fault rounds, only nine advanced to the jump off phase. Capano Z, owned and ridden by Mauricio Guevara of Colombia, were first to tackle the jump off round after posting a clean first round effort in 77.544 seconds, within the 86 seconds time allowed. The team had three rails in their jump off round costing them twelve jump faults in a time of 45.616 seconds. Capano Z and Guevara would finish the class ninth overall.

Kyle Dewar of Ocala, Florida in the irons of his own Gomez Van De Withocve followed Guevara and Capano Z in the jump off order and posted a time of 45.646 seconds with four jump faults which earned them an eighth place overall.

Westwind Equine Training Center’s Werner 61, piloted by Haley Gassel of Lenoir City, Tennessee, followed Dewar and posted the first clean round in the jump off with a time of 45.666 seconds, setting the new time to beat. But, with six rides to go, it was still anyone’s class.

Vale and Troy Glaus’ Quidam’s Good Luck, winners of the $15,000 Nalley Toyota Stonecrest Open Welcome, followed Werner 61 and although they were the fastest in the jump off in a time of 41.081 seconds, four faults would see them finish in sixth place overall.

Swagger, owned by Centennial Farm, Inc. and ridden by Deborah Stephens of Palmetto, Florida, followed Vale in the order and posted a clean round in 44.215 seconds which, for the time, put them in the lead and set the new time to beat.

Derek Peterson of Archer, Florida and his own Forgiven followed Stephens and went clean, edging Stephens out of the lead and setting the new time to beat at 41.487 seconds.

Vale and Equi-Sport, LLC’s E.S. Finou 4 followed in the order and rose to the challenge, posting a clean round in a time of 41.108 seconds, taking the lead.

Karl Beyer’s Blixem, ridden by Megan Wexlar of Reddick, Florida, were next to go, but with four faults in a time of 43.84 seconds, would finish in seventh place overall.

Katherine Dewar of Oconomowoc, Wisconsin and her own Spitfire W sat in the enviable last to go spot in the order. Despite posting a clean round, their time of 41.497 would see them collect third place while Vale and E.S. Finou 4 took the win followed by Petersen and Forgiven in second.

“This was a very exciting class and the crowd loved it,” commented Bob Bell, President of Classic Company. “Our VIP tent has been well-received by the competitors and our sponsors and we all enjoyed great competition this evening,” he added.