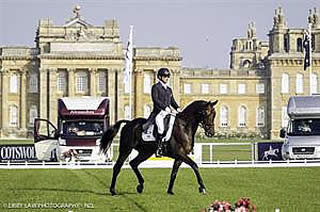 Woodstock, England – USEF Land Rover Competition Grant Recipients Phillip Dutton and Fernhill Cubalawn lead the way for the U.S. following the first phase of the Fidelity Blenheim Palace International Horse Trials. The pair, which were the second competitors into the ring on Thursday morning, earned a dressage mark of 47.0 from the Ground Jury of Christina Klingspor, Andrew Bennie, and Ciska Van Meggelen-Peek and head out onto the cross country in equal 20th place.

Dutton (West Grove, Pa.) began riding the 11-year-old Holsteiner, owned by Tom Tierney and Simon Roosevelt, this summer and has quickly begun to form a partnership with the horse. The Olympic and Alltech FEI World Equestrian Games veteran believes that there is a bright future ahead for Fernhill Cubalawn.

“I’m very pleased with him; he’s such a workman. He goes in and is the same in the warm-up as he is in the main arena, which means I can start to trust him a bit more,” commented Dutton after his test.

On Friday, Dutton rode Tom Tierney and Ann Jones’ nine-year-old Irish Sport Horse gelding, Fernhill Fugitive, to a score of 53.0 to stand 40th after the dressage.

Dutton is joined in Blenheim’s CCI3* competition by compatriots Jacob Fletcher and Katherine Coleman. Fletcher (North Little Rock, Ark.) and his own, Frank Fletcher, and Fletcher Farms’ nine-year-old Irish Sport Horse gelding, Atlantic Domino, stand in 45th place after the dressage with a score of 54.2, while Coleman (New Orleans, La.) lies 70th after scoring 63.0 with her own 11-year-old Irish Sport Horse mare, Courage Under Fire.

Australia’s Andrew Hoy and Cheeky Calimbo lead the field heading into cross country on a score of 34.0.