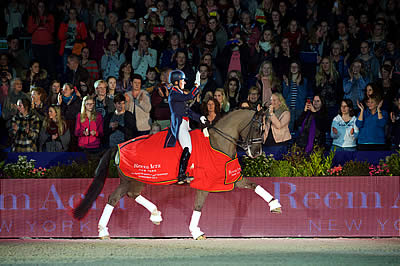 Amsterdam (NED), 31 January 2015 – Great Britain’s Charlotte Dujardin and Valegro swept to victory with the greatest of ease at the sixth leg of the Reem Acra FEI World Cup™ Dressage 2014/2015 Western European League series in Amsterdam, The Netherlands today. The 29-year-old rider only returned from New Zealand a few days ago after presenting Masterclasses in Hamilton and Christchurch, and admitted to feeling “seriously jet-lagged”. But such is the exceptional relationship she has with the 13-year-old Valegro that she only fell 0.4 points short of the world-record Freestyle score the pair set at Olympia, London in December when coming out on top by a considerable margin again this afternoon.

The Amsterdam crowd was treated to a great day of sport, with Germany’s Isabell Werth and El Santo NRW lighting up the arena with a powerful and expressive test that just oozed with fun. When you have a trophy cabinet filled to the brim with Olympic and World Championship gold medals you are entitled to have as much fun as you like, and with her 14-year-old gelding grooving to the sound of David Bowie, the 45-year-old veteran swept into the lead on a mark of 76.775 just before the judging break.

However, Denmark’s Agnete Kirk Thinggaard, who has rocketed to prominence this season, went out in front as soon as the action resumed when posting 78.050. This pair is exciting to watch, showing great balance and rhythm in passage in particular, and demonstrating tremendous harmony between their music and their floorplan.

Two rides later, however, Dujardin and Valegro set the new target so high that there was never any doubt about the final outcome. The Olympic, European and World champion was smiling even before she began, and Valegro just settled to his job, drumming out that now familiar perfect piaffe and passage and sitting steady and low in canter pirouette as the scores came tumbling in thick and fast. Britain’s Stephen Clarke and Dutch judge Eduard de Wolff van Westerrode each awarded the pair artistic marks of 98.00 while Isabelle Judet from France gave them 96.00, and when their final total of 93.900 went up on the scoreboard it was very definitely a done deal.

Heijkoop wasn’t intimidated, however, following with a smooth, confident performance that highlighted her black gelding’s exceptional piaffe for a mark of 82.375. And Germany’s Jessica von Bredow-Werndl, who continues to lead the Western European League standings after today’s leg, once again presented her courageous floorplan that embraces difficult transitions including canter to piaffe/pirouette to walk, for a strong score of 80.900.

Penultimate performer, Diederik van Silfhout with Arlando NH, posted 79.950 for fourth place while fellow-Dutchman, Hans Peter Minderhoud, brought the competition to a close with a calm and elegant test from Glock’s Flirt for fifth spot.

Dujardin was quick to thank her trainer, friend and mentor, Carl Hester, after today’s winning result. “Carl kept Blueberry (Valegro) ticking over while I was away in New Zealand; I’m always so grateful to him,” she said. She wasn’t too pleased with her ride in yesterday’s Grand Prix, however, even though she won that by more than a seven-point margin. “I was really jet-lagged and I was terrible; I was so angry with myself for the way I rode!” she insisted this afternoon.

She talked about what Valegro has been doing since re-setting the Grand Prix and Freestyle world records at Olympia last month. “He had a couple of weeks off over Christmas and then I started riding him for a couple of days before heading off (to New Zealand). But I only had three days to ride after I got back this week, so he’s a pretty amazing horse!” And looking ahead to the Reem Acra FEI World Cup™ Dressage 2014/2015 Final where they will be defending their title, she said, “He won’t be doing anything until then. He isn’t the kind of horse that needs competition all the time, so our next outing will be Las Vegas, and after that we’ll be concentrating on getting ready for the European Championships.”

Runner-up, Danielle Heijkoop, reflected on her performance, saying, “We had a bigger score at Mechelen (BEL) in December, but I’m very happy with how we went today.” Talking about her trainer, Anky van Grunsven, who is a nine-time winner of the FEI World Cup™ Dressage title, 27-year-old Heijkoop said, “We think alike; our attitude is that things can always be better, but for me the most important thing right now is that you can see our score is getting a little higher everywhere from last year; it’s all improving.”

Now riders are already thinking ahead to how their horses will respond to the bright lights and electric atmosphere of the Thomas & Mack Arena in Las Vegas in just over two months’ time. “I’m so excited about it!” said Dujardin today. “I know the crowd starts clapping before the finish, and the place is buzzing all the time, but hopefully Blueberry will be OK with all that and will put on a great show.”

Runner-up, Danielle Heijkoop, says that her gelding, Siro, can be “a little bit crazy” during the prize-giving ceremony and after he comes out of the arena, but that he is usually a thorough professional during his test. “Actually I think he will love it in Las Vegas; when he’s doing a test he really enjoys the crowd, and I hope it won’t be a problem for him.”

15 riders from 8 nations, including six from the host country.

Today’s winners were the defending series champions and World No 1 combination, Charlotte Dujardin and Valegro from Great Britain, who re-set both the Grand Prix and Grand Prix Freestyle world records at the previous fixture at Olympia in London last month.

Their winning Freestyle score of 93.900 today was just 0.4 percentage points short of the world record they set in London at 94.300.

The British partnership also won yesterday’s Grand Prix at the Dutch fixture, with a winning mark of 86.140.

There are three further qualifying legs left to run in the Reem Acra FEI World Cup™ Dressage 2014/2015 Western European League – at Neumuenster (GER) on 15 February, At Gothenburg, Sweden on 28 February and at ‘s-Hertogenbosch (NED) on 14 March.

The series Final will take place in Las Vegas, USA from 15-19 April.

Charlotte Dujardin GBR, talking about Valegro: “He was just fantastic today. It’s always such a pleasure to ride him; he’s so great!”

Danielle Heijkoop NED: “My next competition will be at Den Bosch I think, but I have to talk to Anky (van Grunsven) about it first.”