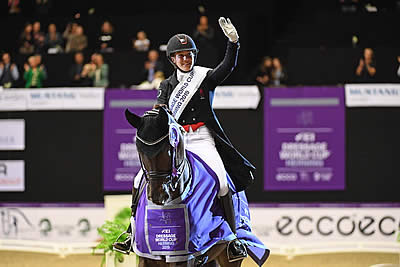 Persisting in the face of the disruption caused by the pandemic that has led to the cancellation of multiple equestrian events in recent months, the FEI Dressage World Cup™ 2020/2021 Western European League gets underway in Denmark this week.

Initially scheduled to take place in Herning, this opening leg has been relocated to the National Equestrian Centre in Vilhelmsborg near Aarhus, where the main manor house, a listed building that dates back to 1842, is closely associated with the world-famous master of fairytale-telling, writer Hans Christian Andersen.

Vilhelmsborg staged the FEI Dressage World Cup™ Final in 2001 when the all-German podium was topped by Ulla Salzgeber with Rusty, while Isabell Werth lined up second with Antony FRH and Rudolf Zeilinger finished third with Livijno.

Werth returns 19 years later as the most decorated athlete in the history of equestrian sport and chasing her sixth FEI Dressage World Cup™ title. She currently holds the top two places on the world rankings with Bella Rose and Weihegold, and brings seventh-placed Emilio to this first qualifier of the new season.

However, the host country’s Cathrine Dufour may well prove to be the one to beat. She is armed with the 10-year-old gelding Bohemian with which she stole the show at last year’s Danish leg of the series when winning both the Grand Prix and Freestyle.

Talking about the horse that day, she said, “Imagine what he can do when I start to push him some more,” and he hasn’t disappointed, topping both the Grand Prix and the Grand Prix Special at the CDI5* in Herning in March of this year, just before the sport was locked down due to the spread of Covid-19.

And Dufour comes to Vilhelmsborg as newly-crowned 2020 Danish Grand Prix champion. She took the title for the fourth time in her career with great performances from her 17-year-old superstar Atterupgaards Cassidy at the championships staged in Uggerhalne last month, where she also became engaged to girlfriend Rasmine Rosedahl Laudrup, daughter of former soccer star Brian Laudrup who is now a popular Danish TV commentator and pundit.

The FEI Dressage Grand Prix will take place at 17.30 local time on Saturday 17 October, with the Grand Prix Freestyle on Sunday 18 October kicking off at 14.00.

Attendance is limited, as the event will be conducted strictly in line with national Covid restrictions and FEI guidelines. However, you won’t miss a hoofbeat because all the action will be LIVE ON FEI TV as horse-and-athlete combinations take their first steps on the road to the FEI Dressage World Cup™ 2021 Final in Gothenburg, Sweden next April.