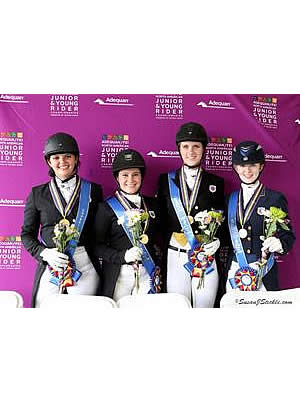 The Young Rider Team Division was very close this year with the Gold medalists earning a team total score of 199.658 and the Silver medalists, Region 3, earning a 199.369 team score.

“It was super close, so kudos to the Silver medal team for really giving us a run for it. It was exciting and nerve wracking,” said Catherine Chamberlain of the Region 7 Young Rider Team.

Gallman noted, “For [Catherine Chamberlain] and me, it’s our last year. I just wanted to do right by my horse and my teammates. Just to be with these girls is amazing.”

Brewin agreed that the team aspect of the competition contributed to their success: “All of the support from all of the other riders really helped each of us perform our best, even if we didn’t have the best tests today.”

Chamberlain said, “The best part about this year for us is that it was a real team effort. We all had a few mistakes so we really had to pull together as a team to pull it off, and I think that was really special.”

Ontario’s anchor rider, Alexandra Meghji, said, “We’re so lucky to be at this amazing championship at this amazing venue with all of these other girls from across North America who share the same passion for horses that we have. For all of us winning the Gold medal today is just the icing on the cake of an amazing day.”

Creech added, “We are all extremely happy and proud of our rides today, especially because we are such a close team. We definitely support each other, and we have so much support from grooms and owners and Equine Canada members and sponsors – everybody that makes this possible. It’s so amazing. We are all so extremely grateful and happy.”

The Junior riders opened the day in the Walnut Ring, where team Mexico North’s Juan Pablo Gaspar Albanez (17, Guadalajara, Mexico) earned victory in the opening speed class aboard Puertas So What.

Albanez was part of the 2014 Bronze medal winning Junior team, as well as a top 10 finisher individually. This year, he looks to improve upon his record.

“Every year that passes you have more experience, and you learn,” Albanez said. “We came here with a great team, and we hope this year that we have gold!”

Albanez continued, “I really like everything about coming here. You get to know people. You get to compete here. You can see how you stand against everyone in your level and with all of your age riders. You just have fun.”

In the Young Rider First Individual Qualifier it was Meredith Darst (18, Lebanon, Ohio) who claimed victory aboard Quester De Virton.

“It’s fun being here with all of the other disciplines. If I wanted to go watch something I don’t get to usually watch all the time, I can, and that makes it a lot of fun,” Darst said.

Darst continued, “Today I just thought, ‘go for it.’ My horse went great, and I’m looking forward to the rest of the week.”

Competition at the NAJYRC continues Thursday morning with endurance beginning at 6:30 a.m. ET. Show jumping team competition kicks off with Junior riders showing in the Rolex Stadium beginning at 8 a.m. Eventing begins shortly after with eventing dressage starting at 8:30 a.m. in the Stonelea Ring.