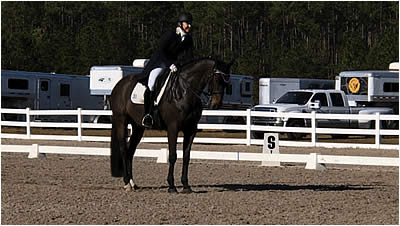 Jacksonville, FL (December 11, 2017) – The Jacksonville Equestrian Center recently began an eclectic month of events with the Dressage on the First Coast Fall Show this December. The show was put on by the Northeast Florida Dressage Association, and featured nearly 40 classes ranging from Training Level through Grand Prix. Riders competed for top scores in the Jacksonville Equestrian Center’s beautiful outdoor show rings.

The Jacksonville Equestrian Center has been known for years as a host of successful dressage shows in Florida. “The staff was professional and on the ball,” said show manager Carlie Evans. Organizations like the Northeast Florida Dressage Association benefit from the facility’s knowledgeable staff, first-class amenities, over 400 permanent stalls, superior arena footing, and close proximity to major highways, downtown Jacksonville, and sunny Florida beaches.

At the Dressage on the First Coast Fall Show, the horses arrived at the equestrian center for a weekend of fun and friendly competition.  “We received lots of great comments on the facility from the old regulars and a few new people that had never been there before that said they will definitely come back,” said Evans.  Winner of the FEI Freestyle Test of Choice, Shelly Van Den Neste, said that “the Jacksonville Equestrian Center has always been one of my favorite but the outdoor arena is so much better now with the new all-weather footing!”  Van Den Neste rode The Governer SRF to a win with a score of 67.525.  The show included Great American/USDF Regional Qualifying classes, USDF/Dover Adult Amateur Medal Program classes, and a USEF Dressage Level 3 Competition. Now that the show has concluded, the Northeast Florida Dressage Association plans to return to the Jacksonville Equestrian Center in March 31 – April 1, 2018, for the Dressage on the First Coast Spring Show.

In an East meets West scenario the Jacksonville Equestrian Center also hosted the Florida Quarter Horse Association (FQHA) Last Chance show in their beautiful 150’ x 300’ indoor arena.  The event featured two days of competition ranging from trail classes to driving for juniors, amateurs and professionals alike.  This show was the last show of the calendar year to earn points and double points towards the year end awards.

The month will finish up with Community Schooling Day on December 27, which horses and riders are welcomed from 10am – 4pm to ride in the state-of-the-art indoor arena for a fee of $10 per rider ($20 if the rider has more than one horse).

Nearly every event at the Jacksonville Equestrian Center is free to spectators. To find out more about the facility and about upcoming events in December and throughout 2018, please visit www.jaxequestriancenter.com or call (904)-255-4215.