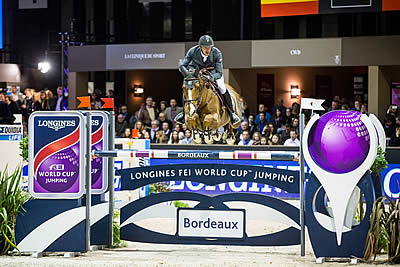 Bordeaux (FRA), 6 February 2016 – Kevin Staut pinned French compatriot, Simon Delestre, into runner-up spot at the nail-biting last leg of the Longines FEI World Cup™ Jumping 2015/2015 Western European League in Bordeaux (FRA). It was Staut’s first major victory for some time, and it was achieved by a brilliant performance from the 35-year-old rider and his 15-year-old gelding Reveur de Hurtebise HDC who brought the packed stadium of spectators to their feet.

With 17 through to the jump-off, and huge tension in the air as riders battled it out for the last few qualifying spots still up for grabs for next month’s Longines Final in Gothenburg (SWE), this was never going to be an easy one to win. And the man who currently ranks 14th in the world was keen to firmly secure his place at the Swedish fixture.

“I felt I needed a few more points but normally I’m not really fast with this horse, and the last time we won a 5-Star Grand Prix was in Monte Carlo five years ago! But he has been fantastic here in Bordeaux and everything went great for us in the jump-off,” said Staut, who added that tonight’s victory is a real confidence-booster for the remainder of this Olympic year.

Pius Schwizer and PSG Future, winners at the penultimate leg of the series on home ground in Zurich (SUI) last Sunday, made a surprise exit from the competition following a mistake at the first element of the influential triple combination, fence six in the first round. But 17 took on the jump-off course designed by Italy’s Uliano Vezzani, and it was as clever as it gets, with control, balance, pace and accuracy all put to the ultimate test.

Starting out over a big oxer, most rode a seven-stride pattern to the following oxer before turning left-handed to yet another which was formerly the second obstacle on the track. And Britain’s Laura Renwick snatched the early lead with Bintang ll when turning sharp right-handed to the fourth jump on this course, the vertical at fence eight which was followed by the tricky double, oxer-to-vertical, at nine. Turning right again horses needed to angle the next oxer, fence 10, before taking a long run to the vertical at 12 and finally making another long gallop to the closing Longines oxer. Second against the clock, Renwick set the target in 42.35 seconds, and although this was clearly a beatable time it was always going to be competitive.

Three horses later, three-time FEI World Cup™ Jumping champion Marcus Ehning went out in front when bringing the spectacular grey stallion, Cornado NRW, home in 41.97 seconds with the smoothest of rides. Ireland’s Denis Lynch and All Star slotted in behind the German with a lovely tour in 42.03 when seventh into the ring, but both were overtaken by a great round from Australia’s Edwina Tops-Alexander who never broke the rhythm with Caretina de Joter to cruise into temporary runner-up position in 40.90 seconds when next to go. However, Staut really raised the bar, and almost lifted the roof off the Bordeaux stadium, when galloping home with the clock showing 39.86 seconds to take the lead.

His partner and team-mate, Penelope Leprevost, looked set to oust him when taking a stride out between the first two fences with Vagabond de Pomme. But fence 10 hit the floor for four faults, so the darling of the French crowd had to settle for eighth place in the final analysis despite producing the fastest jump-off time of 39.30.

There were just three left to run now, including two more from the host nation, and Patrice Delaveau and Lacrimoso looked set to rejig the leaderboard until clipping the penultimate vertical in 39.89 seconds. Dutch star, Mikael van der Vleuten, took a more cautious tour with the ever-reliable VDL Group Verdi to post a clear in 44.11 seconds when second-last into the ring, but Staut’s biggest threat was last man Delestre who, like Leprevost, rode six strides between the first two fences but who seemed to run a little wide on the turn that followed. The French rider who currently holds the no. 2 spot in the Longines rankings and who is seriously threatening world no 1, Britain’s Scott Brash, left all the timber intact but had to settle for runner-up spot when stopping the timers in 40.74 seconds with Qlassic Bois Margot.

“When there are so many in the jump-off you are quickly knocked out by the slightest error,” Delestre pointed out at the post competition press conference. Individual bronze medallist at the FEI European Championships in Aachen (GER) last summer he has, however, finished second on the Longines FEI World Cup™ Jumping 2015/2016 Western European League, behind Germany’s Christian Ahlmann in pole position, and has the Gothenburg Final clearly in his sights.

As does winner Staut, who reflected on his victory. “It’s been such a long time since I’ve been at a press conference I was beginning to forget what it is like! And it has been a long time since I have won anything big; 2015 was not a good year for me,” he pointed out.

His brilliant mare, Silvana, will be officially retired in Bordeaux on Sunday and her retirement marks a turning point for the French rider. “I have had many good wins in my career including the World Cup here in Bordeaux four years ago with Silvana, but now she is out of competition and it’s all a new deal for me. This win is a good thing for the Olympic season though, and I’m delighted for my horse (Reveur de Hurtebise); he is 15 years old but we make a good team together; we have a strong connection,” he said. Reveur will enjoy a two-month break now, and Staut is looking at his options of other horses for the Longines Final. “It will be either For Joy or Qurack – I’m not sure yet,” he said tonight.

Staut also talked with some emotion about what Silvana’s retirement means to him. “She had a great season last year and we decided not to do another one; she has done so much for me and we have so much respect for her – the time seems right just now,” he said. But the great 17-year-old grey mare will still be very much part of his life. “She stays in my stable and I will still ride her every day. It will be difficult to find another horse who could take her place in my heart. She can now look forward to a quiet life and a quiet home, and we will have many more happy days ahead of us!” he added.

The Longines FEI World Cup™ Jumping Final 2016 will take place in Gothenburg (SWE) from 23 to 28 March. For details of the Swedish fixture, check out www.gothenburghorseshow.com or contact Press Officer Lotta Amnestal, lotta.amnestal@ridsport.se, +46 709 79 56 35.

Bordeaux in France staged the eleventh and last qualifying round of the Longines FEI World Cup™ Jumping 2015/2016 Western European League.

This was the first time for the French fixture to stage the last leg of the Western European League series.

17 qualified for the second round jump-off against the clock.

Germany’s Christian Ahlmann is the winner of the Longines FEI World Cup™ Jumping 2015/2016 Western European League with a massive 86 points boosted by three wins during the season.

Edwina Top-Alexander AUS (3rd): “The course was really good, the riders were good and the footing good allowed riders to perform well.”

Eric Dulong, President of the Organising Committee at Bordeaux: “We had 6,800 spectators – we had increased capacity this year and still sold out so we are very happy about that!”

Uliano Vezzani, Course Designer (when asked about having 17 horses in the jump-off): “Sometimes you get four or five more than you planned and sometimes four or five less; that’s the way it goes.”