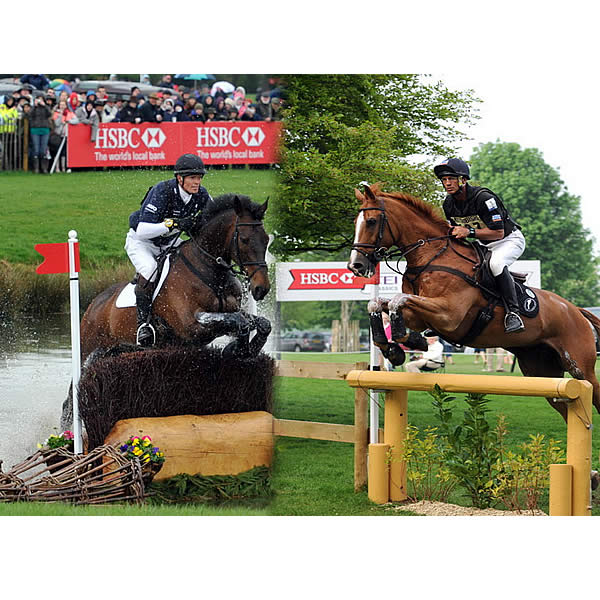 William Fox-Pitt (GBR) and (right) Andrew Nicholson (NZL) – the HSBC Rankings and HSBC FEI Classics series leader – have set the scene for the most thrilling running yet of the Mitsubishi Motors Badminton Horse Trials (GBR) on 3-6 May, fourth leg of the HSBC FEI Classics 2012/2013. (Photo: Kit Houghton/FEI).

Lausanne (SUI), 1 May, 2013 – The scene is set for the most thrilling running yet of the Mitsubishi Motors Badminton Horse Trials (GBR) (3-6 May), fourth leg of the HSBC FEI Classics 2012/2013, and a showdown between two riders who are at the height of their powers.

The two riders, who finished first and second in the 2012 HSBC Rankings, are at the peak of their careers, with the strongest strings of horses they’ve ever had. Between them, their four Badminton horses have won five CCI4*s, and they have set up a fascinating head-to-head for the Rolex Grand Slam of Eventing.

“This is a dream scenario for Badminton,” said Fox-Pitt. “It’s going to be really exciting, although at the end of the day it’ll probably be neither of us winning – hello, Michael Jung! So many things have to come right to win any three-day event. But we’ve both got lovely horses and we’ve both had a great preparation for Badminton, so we’ll see.”

Badminton has received an exceptionally star-studded entry this year, and, as Fox-Pitt mentions, it is Michael Jung (GER), the reigning Olympic, World and European champion, who will undoubtedly start favourite on his best horse, La Biosthetique Sam. He also has a strong back-up in first ride Leopin, third at Pau in 2012.

The unassuming Jung first visited Badminton as a youngster, and has wanted to ride here ever since, but his only public appearances in Britain have both been at Greenwich Park – at the Test Event and last year’s Olympic Games where he won team and individual gold. As a result, many British spectators have never seen him ride, so they will be in for a treat when they see the master at work. Interestingly, no first-timer has won at Badminton since Mark Todd (NZL) in 1980 – could Jung, with his impressive credentials, break this record?

Since Badminton began 64 years ago in 1949, British riders have dominated. However, this year’s contest is wide open. Two rising stars from the Antipodes are Jock Paget (NZL) with Clifton Promise, second at Pau, and Clifton Lush, and Chris Burton (AUS) on Holstein Park Leilani.

Ireland’s Aoife Sisk is sure to go well on Master Crusoe, seventh at the London Olympic Games, and Italy has two stars in Stefano Brecciaroli (Apollo VD Wendi Kurt Hoeve) and Vittoria Panizzon on the bouncing grey mare, Borough Pennyz.

There are six former winners in the field, headed by 57-year-old Sir Mark Todd (NZL), the defending champion who first won Badminton 33 years ago, following up with victories in 1994, 1996 and 2011. He rides Major Milestone and Ravenstar, the latter for Irish rider Jayne Doherty, who is pregnant.

The in-form Andrew Nicholson (NZL), who has just won three consecutive CCI4*s, holds the record for Badminton completions – 31 times – but has yet to win. His best result to date is second in 2004 on Lord Killinghurst. Could 2013 be his year?

Badminton is also a place where young riders make their mark – and this year, there are three candidates for the HSBC Training Bursary, which is presented to the highest placed rider never to have previously completed a 4-star level event: Jamie Atkinson (GBR) on Celtic Fortune, Sarah Ennis (IRL) with Sugar Brown Babe and Manuel Grave (POR) on Samaritano.

Dressage starts on Friday at 9.30am (British time) with Oliver Townend (GBR) first into the arena on Armada. Follow live results: www.badminton.co.uk.