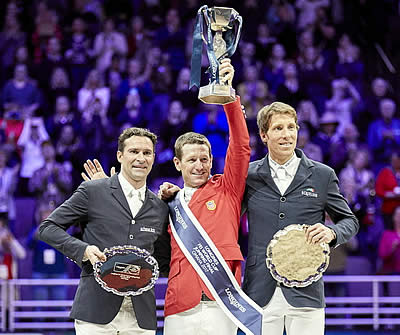 McLain Ward (41) couldn’t hold back the emotions when he finally clinched the Longines FEI World Cup™ Jumping trophy in Omaha (USA). It’s been a long time coming, and the victory was very, very sweet.

“I’ve been doing this for 25 years or more, and I’ve come so close so many times and one way or another I’ve messed it up. I’m so grateful for my horses and the people around me like my groom, Lee, who has been with me for 29 years, they all helped me pull this off!”

Favourite from the outset and faultless all week with the brilliant mare HH Azur, the double Olympic gold medallist got a little more breathing space when second-placed Gregory Wathelet from Belgium had a fence down with Forlap in the first round. But Switzerland’s Romain Duguet stalked the New Yorker to the very end to take runner-up spot with TwentyTwo des Biches, while Sweden’s Henrik von Eckermann moved up from sixth to third place when also jumping double-clear with Mary Lou.

Ward knew a pole down would lead to a head-to-head against Duguet, and any more than that would hand the trophy to his Swiss rival, so you could hear a pin drop as he set off, last to go over Alan Wade’s massive second course.

“I’ve been in this situation where I’ve cracked, so I took a breath and believed in my horse – and she did it!” he said after raising the roof of the CenturyLink Centre and taking his place in the history books as the 10th American to take the title in the 39-year history of this prestigious series.

McLain Ward USA – 1st: “My only game plan was to do the best I could every day and hopefully be in the hunt today. You have to go into these championships now knowing that you have to jump clear rounds to win. There’s no room for error.”

Romain Duguet SUI – 2nd: “I came here with no pressure. For me if I finished in the first 10 I was going to be really happy. I go day by day, so for me this second place was just a bonus today!”

Henrik von Eckermann SWE – 3rd: “When I decided to leave Ludger (Beerbaum’s) stables and go out on my own, Karl Schneider said he had this horse and I should come and try it and if I liked it he would keep it until September. So I tried her and I knew she was something special right away.”