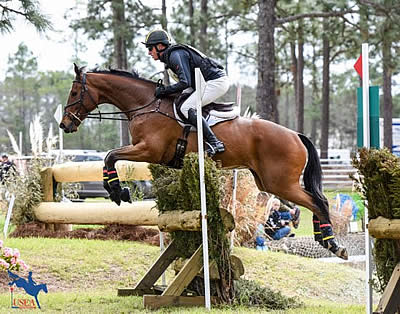 The USEA Young Event Horse Program (YEH) introduced the Holekamp/Turner Young Event Horse Le Lion d’Angers Prize and Grant in 2012 with the support of Dr. Timothy and Cheryl Holekamp and Christine Turner to encourage the development of future U.S. Eventing Team horses by providing them with increased international exposure and opportunity as young horses. The grant is awarded yearly to the highest scoring horse from the USEA Young Event Horse 5-year-old East and West Championships combined during their 7-year-old year that is qualified, willing, and able to compete in the FEI World Breeding Eventing Championships for Young Horses at Le Mondial du Lion d’Angers in France.

Horses must have completed one CCI* and one CIC2*, both with no cross-country jumping penalties and no more than one rail in show jumping, in order to be qualified to compete in the FEI World Breeding Eventing Championships 7-year-old CH-2* division and therefore be eligible for the grant.

In the interest in promoting domestic breeding, North American-bred winners of the Grant are awarded with a cash prize of $17,500 to offset the expenses of traveling to France for the Championships, while imported horses are awarded $8,000. Since the intention of the prize is to create a pipeline for U.S. Team horses, the eligibility of top-placing YEH horses remains with the horse, regardless of change of rider after the YEH 5-year-old Championships. However, the horse must be ridden by a United States citizen to receive the grant.

Doug Payne’s Quantum Leap (Quite Capitol x Report to Sloopy), a 7-year-old Zweibrucker gelding, is the recipient of the 2018 Holekamp/Turner Grant and will be traveling to Le Mondial du Lion d’Angers to represent the United States at the 2018 FEI World Breeding Eventing Championships. Bred by Elizabeth Callahan of Cool Na Grena Sporthorses in Oxford, Maryland, Quantum will be the second North American-bred horse to compete at the Championships with assistance from the grant. The first North American-bred horse to receive the grant was Fleeceworks Royal (Riverman x Marisol), a Holsteiner mare owned by Judith McSwain and bred by Charlotte Wrather of Cottonwood Ranch. Twilightslastgleam (National Anthem x Royal Child), an American-bred off-the-track Thoroughbred owned by Tim and Nina Gardner and bred by Nina, was named the recipient of the 2017 Holekamp/Turner Grant but had an unfortunate minor injury before boarding the flight to France.

Payne selected Quantum as a yearling and produced Quantum all the way up to the two-star level without a single cross-country jumping penalty on his record. Most recently, Payne and Quantum won the Intermediate division at the Millbrook Horse Trials in August and were second in the CCI2* at Ocala International in April.

“He was well bred and put together,” recalled Payne of Quantum as a yearling. “We trusted Didi in that this was the second of four horses that we currently have of hers. We try to buy at least one yearling a year to ensure a pipeline of talented horses for the future. Being that we have the space, it’s the most affordable means to do so.

“In the barn is a just like a big dog, and he’s an odd combination of quiet and sharp when riding,” shared Payne. “He’s very quick and careful to jump and his flat work is coming along very well. He’s just starting to be able to use his body as a cohesive unit rather than some massive unattached spider legs. He’s absolutely a future champion!”

Payne has competed overseas on three separate occasions: in the CCI3* at Boekelo aboard Running Order in 2010, in the CCI3* at Saumur aboard Crown Talisman in 2014, and in the Blenheim CCI3* with Vandiver last fall. “I have looked forward to our return to France ever since [competing at Saumur],” Payne commented. “It’s an incredible honor to attend such a competition and I think Quantum will greatly benefit from the experience.”

“I think [the Holekamp/Turner Grant] is a great asset for U.S. eventing,” stated Payne. “In the end these talented young horses will go on to represent the United States. International trips like this will only better prepare them for that experience. This is, after all, the stated goal of the Young Event Horse program, to develop future talent for team success in the years to come.”

Payne expressed his gratitude to Susan and Dave Drillock, who joined the team behind Quantum when he was a 4-year-old. “Without their help I would not have the opportunity to ride such an incredible horse.”