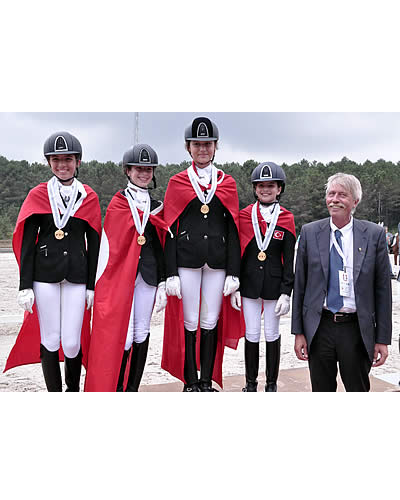 Istanbul (TUR), 5 August 2015 – Athletes from the host nation and Bulgaria dominated the podium when the FEI Balkan Dressage Championships returned to Istanbul, Turkey last weekend. These Championships were first staged in Istanbul in 1968 and have since become a developmental opportunity for athletes in the region. This year they gook place at the Kemer Golf and Country Club which boasts the largest indoor equestrian centre in the country.

The 2014 Championships, which were held in Serbia for the first time in 31 years, saw Greek riders resume their traditional position of dominance. But this time around Greece was not represented as riders from Bulgaria, Moldova, Romania and Turkey battled it out for the medals.

The Children’s Championship began with a Preliminary competition in which the Turkish parnership of Yagmur Ozturk and Theo Diablo first threw down the gauntlet with a winning score of 72.462. Their Turkish counterparts Debora Haviyo (Sim Salabin 2), Irem Kaplan (Zayson F) and Siraz Bayburtluoglu (Wanadoo) filled the next three placings, with Bulgaria’s Ilina Ivanova (Razvigor) claiming fifth place, and this would give a strong indication of how things would play out over the following days.

With a combined score of 203.300, the four Turkish riders joined forces to clinch the team title by a considerable margin ahead of the silver medallists from Bulgaria – Ivanova, Olivia Petrova (Living on the Moon), Alexandra Pancheva (Vrangler) and Nur Sharaf (Aida) who posted a final tally of 186.433. Romania took the bronze, hampered by elimination for Sandra Takacs (Olimpia) but Alexandru Ghita’s 56.700 with Leonar and a strong 60.767 from Darius Comanescu and Magnolia who were members of last year’s silver-medal-winning side, brought the Romanian total to 117.467.

And Ozturk, Kaplan and Haviyo filled the three steps of the individual podium to cement Turkey’s supremacy in the Children’s category, Ozturk claiming the gold with a mark of 69.844 while Kaplan posted 64.875 for silver and Haviyo was close behind with 63.594 in bronze medal spot.

There was no Junior team competition this year, but there was plenty for the Bulgarian contingent to celebrate when their riders filled all three steps of the individual podium.

Katerina Tsvetanova steered her 2014 individual bronze medal-winning partner, Preslev, into individual gold medal spot on this occasion. The consistent 16-year-old who also won Junior team silver in 2013 and 2014, posted a mark of 62.737 to finish almost three full marks ahead of Stephanie Nesheya with Dagestan, while Zdravko Trenev and Silver boy clinched the bronze.

There was no team competition in the Senior category either, and it was 2014 team silver medallist, Raiko Ganukov from Bulgaria, who topped the podium in the Senior Freestyle Championship.

Ganukov has enjoyed considerable success with the 13-year-old grey mare Ambrozia, lining out in every FEI Balkan Dressage Championship since 2009. And the 44-year-old rider pinned fellow-Bulgarian Stephanie Gatcheva and Forever into runner-up spot in last week’s individual qualifier in which 27-year-old Tatiana Antonenco from Moldova finished third with Polygraf.

When it came to the Freestyle medal decider, Ganukov and Ambrozia reigned supreme once again while Turkey’s Semih Ersoy claimed silver with Clockwork and Moldova’s Antonenco, who finished fourth in the CDI3* Grand Prix at Kaposvar in Hungary last September, clinched the bronze.