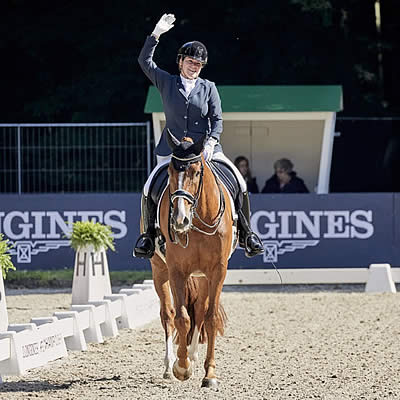 Leading the charge was Paralympic and triple world gold medallist Sanne Voets in grade IV’s individual test, swiftly followed by Frank Hosmar in grade V’s competition. Both riders successfully defended their titles from the last European championships in Gothenburg in 2017.

Voets’ win came on Demantur Rs2 N.O.P., with a score of 76.659%. And in a straight replication of Gothenburg’s competition, silver went to Belgium’s Manon Claeys on San Dior with 73.805%, and the bronze to Sweden’s Louise Etzner Jakobsson with 72.902% on Zernard.

Clearly emotional after her first major international win in front of a home crowd, Voets said: “I’m European champion again. I love that. I am thrilled!

“I was really pleased with him [Demantur Rs2 N.O.P.]. I had a little hiccup in my first transition and that was my mistake. This horse knows what to do but waits for me to say ‘when’ so he was a bit confused. But I can’t blame him.

“I’ve been nervous all week. I arrived on Sunday and then had to wait three days to ride. When I woke up today, I was happy to get started.”

Claeys was delighted with her silver too, adding: “It feels really good. Sanne deserves to be number one, but I’m very happy with the test today.”

Hosmar’s gold came on his long-term partner, Alphaville N.O.P. The pair has been a team since the London 2012 Paralympic Games and scored a personal best of 75.810%. His close rival and world number one, Great Britain’s Sophie Wells, took the silver on C Fatal Attraction with 75.595%. And in a major surprise, just weeks into their riding partnership, Belgium’s Michele George stormed back to a championship podium for the first time since Rio 2016 to take the bronze on Best of 8 with 72.571%.

“I’m really delighted,” Hosmar said. “He was so nice and every step I could manage him. He was totally controlled and that’s what I like. I’m enjoying the home competition and there are many more people here from where I live including my friends and family who can come and watch.”

Wells was philosophical about her second place and said: “He was a little tense. He didn’t notice anything as we went in but then it was as if he thought, ‘oh there’s a lot of people here.’ But that’s horses, isn’t it?”

Wells also scored the first 10 of the championships but laughed: “Started to go downhill from there though.”

Outside of the medals there was better news for Great Britain’s Nicky Greenhill in grade IV. She’s her country’s first ever visually impaired rider at a major competition and is making her European debut. It’s fair to say she’s not had the easiest of starts though.

For starters, she’s here on her reserve horse, King Edward I, after her usual ride Betty Boo was left at home. Then her guide dog Sparky had some transportation issues with certain local taxis, and her husband Gary, who calls for her in the arena so she knows where she is, lost his voice. To cap it all, she was stung by a wasp and ended up taking a precautionary visit to hospital with anaphylactic shock.

However, she came a solid fourth in her grade, and was delighted with that result. Writing on her Facebook page, she said: “Wow, what a day. I think I have proven now that I can cope with most challenges that are thrown at me.”

After two days of competition, the Dutch are firmly at the head of the para dressage medal table with two golds, a silver, and a bronze. Denmark, Norway, and Austria are equal second with a gold each, while Great Britain are third with two silvers. Belgium has one silver and two bronzes.

The championships now have two days of team competition ahead. If the medals are anything to go by, that’s likely to be a tight battle between the home nation, the Brits, the Germans, the Danes, and the Belgians.