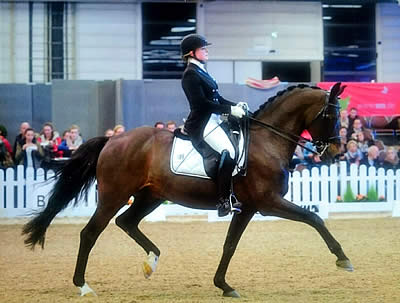 Etteln, Germany (September 23, 2016) – Devon Kane of Diamante Farms in Wellington, Florida is known as an accomplished dressage trainer, competitor, and clinician; but despite all of her equestrian success stories, Kane never hesitates to choose a horse’s well-being over another blue ribbon. Kane is also quick to spot a young rider who could use her help in rising up the ranks in dressage. Katharina Hemmer, a young German dressage rider, can certainly attest to this.

Hemmer has been working at Olympic Gold Medalist Hubertus Schmidt’s dressage facility in Etteln, Germany for the past three years. Kane trains under Schmidt, and while spending a summer training with him in Germany along with a few of her own horses from Diamante Farms, she discovered a perfect way to help one of her horses while also helping Hemmer’s dressage career advance.

Diamante Farms’ Don Angelo, an Oldenburg gelding by Don Larino, had suffered from severe allergies while living at Diamante Farms, an elite dressage training facility owned by Devon Kane and her mother Terri Kane in South Florida. While in Germany with Kane, Don Angelo’s allergies disappeared. “He started really thriving there,” Kane stated. Although she knew that the impressive gelding could dominate in dressage competitions in the U.S., after seeing his allergies improve so much in Europe, Kane chose not to bring Don Angelo back home. When she saw Hemmer riding at Schmidt’s facility, a new idea for Don Angelo’s future was born.

“Katharina really stole my eye a little bit more than the other riders at Hubertus’s. She works really hard, she’s really sweet, and she’s a great rider. You can tell she truly cares about the horses and about riding. She really is everything we were looking for in a rider for Don Angelo, and we felt that it would be a perfect opportunity for Katharina to be able to compete with him,” Kane explained. So Don Angelo remained in Germany with Hemmer and has competed successfully with her while remaining allergy-free in his new home. “We take care of everything – the vet bills, the feed, whatever he needs,” said Kane, “and Katharina does the rest.”

For Hemmer, this was the perfect arrangement. “When Devon first offered me the ride on Don Angelo, I felt really honored and thankful for this great chance,” said Hemmer. “Don Angelo gave me the chance to make the step into the Under 25 tour. We competed in the Under 25 tour in some big national shows this year. We placed really well there. In Münster for example, we got the best result of all the Under 25 riders in the Intermediate B. Don Angelo is also very experienced with the Grand Prix movements, so I can learn a lot from him.”

Don Angelo and Hemmer were especially successful this summer. “Don Angelo and I had some really nice tests, and made great progress in general. A highlight of the summer for me was my first ‘real’ Grand Prix. Angelo did a great job! We finished fourth in a very talented and experienced field of riders. I was very happy about it, and really thankful to the Kane family for giving me the opportunity to ride such a great horse.” The accumulation of show ring successes for the pair also earned Hemmer the Golden Rider Badge. “In Germany, riders get the Golden Rider Badge when they win 10 tests at Small Tour level. One of the 10 needs to be a minimum of Intermediaire I,” Hemmer explained. “I got the Golden Rider Badge this summer. I’m very proud of this achievement, because I think earning it is a goal that every rider has.”

Outside of the show ring, Hemmer and Don Angelo’s partnership is just as strong as it is in front of the judges. “Our connection grew quickly from the beginning,” Hemmer smiled. “Don Angelo has a great personality and an adorable character, which made me fall for his charms. He is always fighting for me, which is a great feeling.

“My long term goal in dressage is to improve as much as possible and make the best out of my opportunities. I want to say thank you to Terri and Devon Kane for entrusting me with Don Angelo,” said Hemmer.

To the Kanes, seeing the affection between Don Angelo and Hemmer makes it all worthwhile. Back in Wellington, Florida, Devon Kane and everyone at Diamante Farms continues their dedication to helping horses and riders like Don Angelo and Katharina Hemmer find happiness and success in the show ring. Besides working with her own clients and horses, Kane is available to give clinics that help riders achieve that ideal partnership with their mounts. Diamante Farms offers top-quality training, clinics, boarding, and sales in dressage on its beautiful 10-acre estate. Learn more about Diamante Farms at DiamanteFarms.com or call 561-307-2831.