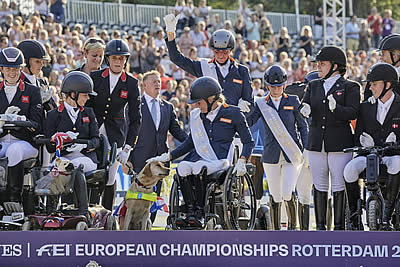 Top scores by Frank Hosmar and Sanne Voets secured The Netherlands their second major international team title at the Longines FEI Para Dressage European Championships in Rotterdam. In front of an excited home crowd, the pair led both their Grades in the final day of the team contest. The win comes just under a year after their victory at the FEI World Equestrian Games Tryon (USA), the first time Great Britain were beaten in a European, World, or Paralympic team competition.

Hosmar, Voets, and teammates Nicole den Dulk and Rixt van der Horst scored 227.039% and took the title one year and one day ahead of the opening ceremony of the Tokyo 2020 Paralympic Games. The win was one of the team’s main objectives of these championships, to prove that the 2018 win wasn’t a one off.

“It’s good, and sometimes easy to win… but staying there is harder!” — Frank Hosmar (The Netherlands)

Team bronze went to Denmark with a team made up of mother and son combination, Tobias and Line Thorning Joergensen (Grades III and V, respectively), alongside Caroline Cecilie Nielsen (Grade III) and Camilla Christensen (Grade V). They scored 216.493%.

But the corks popped for the Dutch who had gathered together to watch the final stages of the competition and see their gold confirmed. “From day one they’ve been performing very well,” said an elated Chef d’Equipe Joyce Heuitink, “but then it’s a new competition and you have no idea, and nothing is for sure.

“I was actually a little bit nervous. I was really hoping we could equal the gold medal from Tryon and then you realise it’s not so easy. It was hard in Tryon and it was hard here. I’m so, so happy.

“Being at home everyone can celebrate it with family and friends and that’s the nice part of it, and just the extra vibe with everybody here. It’s been an incredible season and they’ve worked very hard.”

Grade II’s den Dulk added: “Wow! It’s amazing. It’s brilliant. We knew we had a strong team, and we’d been performing very well all year. We had a great base from yesterday and to finish with such a great score was really a team effort and that’s great. I think this is one of the best championships for us as a team.”

Earlier, Hosmar’s score of 75.860% on Alphaville N.O.P. set the Dutch on their way to gold in the Grade V test. As in the individual test he edged Great Britain’s Sophie Wells into second place, on C Fatal Attraction, and scoring 75.651%. Regine Mispelkamp of Germany was third on Look at Me Now, with 71.628%.

Voets gave a yelp of delight at the end of her Grade IV test. On her individual European gold winning Demantur Rs2 N.O.P., she scored 77.150%, the highest score of the week so far. Belgium’s Manon Claeys scored 74.850% on San Dior, while Sweden’s Louise Etzner Jakobsson was third with 72.400% on Zernard.