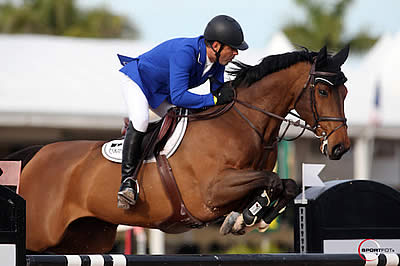 Bob Ellis (GBR) is the course designer in the International Ring for WEF 5 competition. Ellis set the speed track for 80 entries in the morning’s $35,000 Douglas Elliman 1.45m Classic with 29 clear rounds. It was a race against the clock as Doda de Miranda clocked the winning time of 55.13 seconds, 24th in the order of go, with AD Nouvelle Europe Z.

De Miranda has owned AD Nouvelle Europe Z, a 12-year-old Zangersheide mare (Nelson Z x Jimtown), for two and a half years and knows his mount well. The mare has had many top results, including a win to start off the 2016 WEF circuit in week one’s $35,000 Ruby et Violette WEF Challenge Cup Round 1.

“She is a fantastic horse – very fast and very competitive,” de Miranda stated. “A class like that is not easy to win because you have so many good combinations. I saw that I was a little bit faster than Jessica (Springsteen), and she is so fast always, so I knew that I could be in the top three. I am very happy that we could hold the lead until the end. It is important to win for me, especially now that I am a little bit far down in the FEI world ranking. My goal from now on is to try to take more risk to climb back up.”

Speaking of his plan on course, de Miranda noted, “The only doubt for me was from (jumps) one to two because there was a possibility to do six strides, but when I do that sometimes she gets too flat for the end. I decided to do seven and do my best for the rest. It was a good thing to do because even when you wait in one line, she can be quicker after, and she can recover easily. If I do one less (stride), then maybe I will have one rail somewhere else because she gets too open.”

Detailing his partnership with AD Nouvelle Europe Z, de Miranda explained, “She has had a few grand prix wins. She is a very good horse because you can play in speed classes or also jump big grand prix. When I have a good program, she can win any class. She is wonderful.”

Also competing in the International Ring on Wednesday, the $6,000 1.40m speed, sponsored by Illustrated Properties, was held in a California split with 141 entries in total. Ronan McGuigan (IRL) and Capall Zidane were the winners of Section A with the fastest time overall. Laura Chapot and Shooting Star topped Section B with the second fastest round.

The fifth week of competition at the 2016 Winter Equestrian Festival continues on Thursday with the $130,000 Ruby et Violette WEF Challenge Cup Round 5 featured in the International Ring. In the Rost Ring, the CWD Saddlery Performance Working Hunter 3’6″ division will award championship honors for week five. For more information and full results, please visit www.pbiec.com.