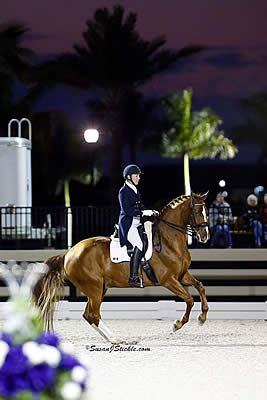 Wellington, FL – January 30, 2014 – Diane Creech and Devon L were on top of their game Friday night at the Adequan Global Dressage Festival 3 CDI-W. Their standout performance earned them a second place finish against tough competition in the Grand Prix Freestyle, a qualifier for the Reem Acra FEI World Cup Final.

Creech and Devon L, a 14-year-old Hanoverian gelding (De Niro-Wibranda, Wolkenstein II) owned by Leatherdale Farms, scored 73.175 percent for their performance under the lights in front of a large crowd.

“I think Devon was fantastic,” Creech said. “I’m totally ecstatic. He was very powerful, and he was still focused on me with the atmosphere. I was very happy with how he handled everything.”

Creech credits Devon L’s owners, Doug and Louise Leatherdale, with having the patience to allow him to mature into the top competitor he is today. She noted that he seemed to enjoy the electric atmosphere.

“I love having the audience, and I’m so happy that Devon is getting into it,” she said. “He’s not afraid any more. He just gets excited.”

It was the pair’s second performance of their new freestyle, set to “Safe and Sound” by Capital Cities. Creech was thrilled with Devon L’s effort and feels the music is a good fit.

“I think he likes the routine and the music,” she said. “You can really feel how he perks up on the inside, almost like he’s tapping his toe.”

“There are quite a few difficulties in the freestyle, and he answered every question,” she added.

The pair’s excellent execution of the challenging test helped them place well against a top international field. The class of 14 included riders from six countries and horses who have competed around the globe.

“I was so excited about him,” Creech said. “He’s my young, up-and-coming Grand Prix horse. Mr. and Mrs. Leatherdale bought him, and they are so excited and so happy to have him. We believe that he has a really bright future.”

She said Chrevis Christo has an incredible work ethic and always wants to please.

“He’s sweet and he tries very hard,” she said. “He doesn’t like to make mistakes. He never says no and always wants to keep trying.”

Both Devon L and Chrevis Christo will have some time off to relax and “just be horses” after their successes over the weekend. Next up for Creech is the Adequan Global Dressage Festival 4 National show on Feb. 1-2, where she will compete Diana C and Hallmark 3, both owned by Leatherdale Farms.