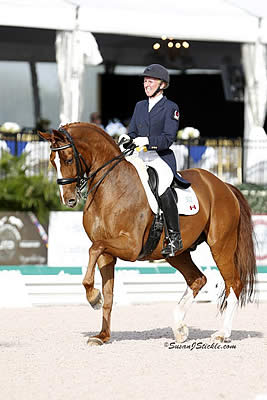 “I thought that Devon was incredible,” Creech said. “I was really happy with him. Again he proved to me that he is ready for it now. He goes in with the atmosphere and he’s really good. He stays with me. He’s rideable. I’m so excited about him!”

She was pleased with the horse’s performance in the freestyle and his increasing confidence in the ring.

“I think Devon enjoys his music,” she said. “I feel like he’s saying, ‘I really like this. Can we keep on going?’ I think he turned the page.”

Devon L is a 14-year-old Hanoverian gelding (De Niro – Wibranda, Wolkenstein II) owned by Louise and Doug Leatherdale of Leatherdale Farms. The Leatherdales will come to Florida from Minnesota this weekend to escape the cold and watch Creech work the Leatherdale horses she has in training.

“It will be really nice to see Doug and Louise,” Creech said. “They can get out of the cold and enjoy the sunshine a bit, so it will be a small holiday for them and they can see the horses train and go. And, we’ll talk a little bit about what our future plans are while they are here.”

She said the Leatherdales have patiently allowed Devon L to mature and she can’t thank them enough for supporting her.

“It just takes time and I’m just so grateful that Doug and Louise were so patient to wait it out – which was not an easy task to do,” she said. “They are so supportive with the young horses and they are giving them time.”

She also brought out another Leatherdale Farms horse, Chrevis Christo (Lavallo – Chrevi’s La Vi, Natador) in the Intermediaire II at the AGDF 5 National show. The pair scored a 66.553 percent on Thursday to secure first place and a 72.105 percent on Friday to take the second place spot, both in FEI Test of Choice classes.

“I think that Christo is really coming along nicely,” Creech said. “He’s developing. He’s getting stronger. We’re super excited about him being our future Grand Prix horse.”

Creech will not compete in this weekend’s AGDF 6 National show and will instead spend time training and making plans for the future with the Leatherdales. She trains with Danish Olympian Lars Petersen in Loxahatchee, FL, and said he has been invaluable in helping her develop the horses.

“Lars has such a wealth of knowledge and we have been working on bringing what we do at home into the warm-up ring and then bringing that into the dressage arena,” she explained. “Lars has a lot of experience with different kinds of horses with different kinds of mindsets. He’s certainly the best person to have by my side to help me. I think Doug and Louise are so happy to have Lars as our trainer.”

Creech expressed her delight in being able to work with the Leatherdales and Petersen.

“I’m probably the luckiest girl in the world,” she said.