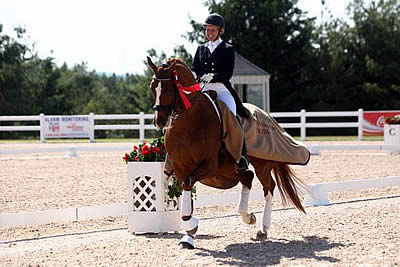 The Pair Scores a Personal Best

Palgrave, Ontario – June 13, 2014 – Canada’s Diane Creech and Devon L claimed the win in the Grand Prix Freestyle with a 75.10 percent at the CDI-W Spring into Dressage show held at the site of the 2015 Pan American Games near Toronto, Canada, the Caledon Pan Am Equestrian Park.

Creech and Devon L, a 14-year-old Hanoverian gelding (De Niro-Wibranda, Wolkenstein II) owned by Leatherdale Farms, notched the win at the competition that served as a World Cup of Dressage qualifier, as well as an official test for the 2015 Pan American Games.

“It was a very exciting phone call to make to my owners, Mr. and Mrs. Leatherdale,” Creech said. “They are so proud of the accomplishment of winning this big event. Devon was breathtaking. He had so much power and still all the focus he needed. We had no mistakes and it was so much fun.”

Creech said she loves the freestyle music created by Karen Robinson and was especially happy to ride and win in front of a home crowd.

“Many friends were sitting and watching and, at the end, cheering,” she said. “The fundraising event from CDAAP [Canadian Dressage Athlete Assistance Program] was incredible and I want to thank Deborah Kinzinger-Miculinic and everybody who helped to make this happen.”

After the ribbon presentation, the winners were treated to special prizes donated by Butternut Ridge and Kinzinger-Miculinic

“I won a big screen TV!” she exclaimed. “This is so generous from Mrs. Kinzinger-Miculinic. I really want to thank her and [Special Advisor for Dressage Canada] Desi Dillingham for making us feel special. Mr. and Mrs. Leatherdale will love the Butternut Ridge sponsored trophy, I will enjoy the TV, and Devon will love all his carrots and a few days off.”

Situated 20 minutes from Minneapolis, MN, Leatherdale Farms is a privately owned farm owned and managed by Louise and Doug Leatherdale and dedicated to Hanoverian, Trakehner and Oldenburg breeding. The Leatherdale family owns several licensed stallions based in Germany at Hengstation Jens Meyer: Hanoverians Dorum, the premium elite, Damsey (Dressage Royal), First Dance (Florestan II), Rob Roy (Rubin Royale), Hampton (His Highness), Beltano (Belissimo M); the premium elite Trakehner, Herzensdieb (Tambour); and the Oldenburg Fairbanks (Flemmingh). Frozen semen is available in North America and Europe. Leatherdale Farms was also the owner of the Licensing Hanoverian stallion His Highness, who died in 2007 and whose progeny is much appreciated all over the world.